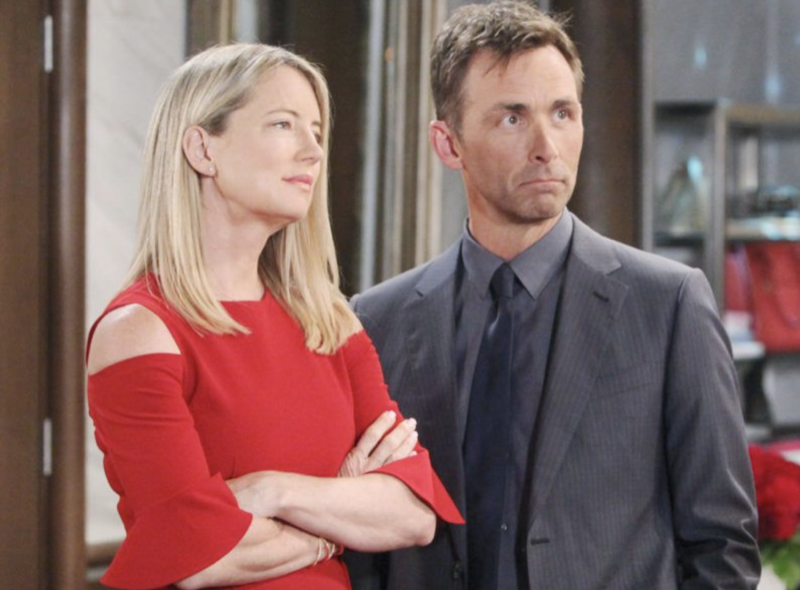 General Hospital viewers will recall that Carly knew Nelle was Nina Reeves’ (Cynthia Watros) daughter for months! Subconsciously, she could have known for years that Nelle had the split heart pendant as a child. But then, Carly was barely out of her teens if that, and remembered the little girl but wasn’t paying a lot of attention that day. Nelle had been in Port Charles for a couple of years before she confronted Carly about who she was and that they had met before.

It was only after Nelle’s fall from the cliff and her “burial” that she remembered the pendant necklace that Avery Corinthos-Jerome (Ava and Grace Scarola) found was Nelle’s. That is the reason that she went to extraordinary lengths to try and keep the necklace a secret, but Nikolas Cassadine (Marcus Coloma) interrupted Carly’s scheme. She and her mother, Bobbie Spencer (Jacklyn Zeman) had visited Wyndemere Castle where Carly plotted to swap Avery’s necklace with a different one she had purchased.

That way Nina could never see the real pendant on Avery and would never be able to put two and two together; or perhaps, that should behalf and a half together! Bobbie had looked for it and failed to find it, so as she stalled Ava Jerome Cassadine (Maura West) in the living room, Carly went on the hunt. She found the necklace in Avery’s dollhouse but just as she was getting ready to make the swap, Nikolas walked in and startled her, and she dropped the two necklaces. She picked up the real one and took it with her and the rest is history!

In the Metro Court restaurant after Nina spotted the necklace on Sasha Gilmore (Sofia Mattsson) and retrieved it, the whole story came out as Carly made up one lie after another to cover. Jasper “Jax” Jacks (Ingo Rademacher) refused to go along with Carly’s scheme any longer and told Nina the truth. All the while Valentin stood by as Nina, Jax, Carly and he stood in the Metro Court and Nina finally realized Nelle must have been her long-lost daughter as she put the two halves of the necklace together. He was there as little Avery explained to Nina that she wanted Sasha to have her good luck charm and as Michael Corinthos (Chad Duell) verified Nelle had been at the Corinthos cabin.

Avery had found the necklace outside the Corinthos cabin and as he heard the conversation about Nina’s baby being given to a couple in Florida, he verified Nelle was from Florida. Carly stood stone silent and made up some excuse that some jogger could have dropped the pendant in the woods. Valentin grew angrier and angrier at both Jax and Carly, but at least Jax finally came clean. Carly didn’t! Finally, Valentin will have all that he can take of Carly! Now Nina is totally devastated because of the missed opportunities with Nelle while she was still alive, and he tries to comfort her and pick up the pieces. Nina is too mad at Jax even though he did come clean – after knowing for months!

He reminds her she tried to “fix” Nelle, but Nelle wasn’t fixable any more than her mother, Madeline Reeves (Donna Mills) was. Nelle must have inherited the evil gene from her maternal grandmother and what happened to her in life must have activated it. Nina is still inconsolable. Valentin now turns his attention to Carly, and if that moment they were at Wyndemere Castle, he would probably push her off the parapet! He tears into her with the force of a thousand hurricanes as Carly smugly refuses to budge! Finally, Valentin loses it and gets ugly at her and tells her perhaps Sonny Corinthos’ (Maurice Benard) “death” is really karma coming back to bite Carly for all her years of lies! NOBODY hurts Nina on Valentin’s watch!