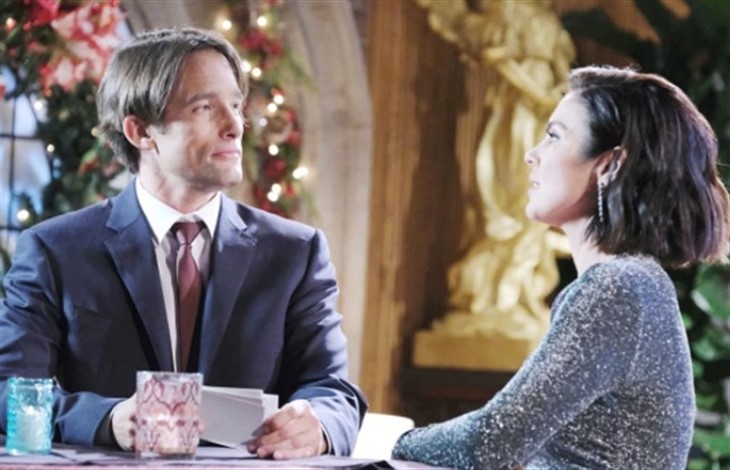 Days of Our Lives (DOOL) spoilers suggest that Philip Kiriakis (Jay Kenneth Johnson) will be stunned when Chloe Lane (Nadia Bjorlin) slaps him across that face as he makes a pass at her this week. Chloe blames herself for Brady Black (Eric Martsolf) getting shot outside her hotel room. However, Chloe blames Philip as well and refuses to associate with him. Will Philip and Chloe eventually reunite?

Days of Our Lives Brady was trying to protect Chloe when he asked her not to allow Philip to stay in her apartment. Brady has dealt with these situations before, he is the grandson of Victor Kiriakis (John Aniston) and knows things can go bad from time to time. Brady would have never been shot if Chloe had only listened to him about Philip. Brady tried to explain that Philip was putting her life in danger as well as anyone around her. Chloe swore that she knew what she was doing. Chloe argued time and again that she knew was she was doing. However, Chloe was proven wrong in the worst way possible.

Days of Our Lives Philip believes that Chloe’s choices mean that she wants to continue a relationship with him. Philip will choose to kiss Chloe prompting her to quickly slap him. How dare Philip kiss here when Brady is fighting for his life. Brady has just taken a bullet that was meant for Philip and he’s dismissing that for a kiss. Does Philip have any sympathy for the man who almost died because of him? Does Philip expect Chloe to simply say that Brady survived so they can move on together?

Days of Our Lives Brady tried to warn Chloe time and again what was going to happen if she stayed around Philip. Now Brady is the one fighting for his life because of her not listening. Philip may not feel bad about that but at least Chloe has the decency to. Will Chloe finally see that Philip has learned nothing from this ordeal? Is it finally clear that Philip cares about no one but himself and never will?

Days Of Our Lives (DOOL) Spoilers: Jack Tries Paying Gwen To Disappear, Gets Slapped And Snapped At https://t.co/bm4bDEtiiu pic.twitter.com/mTbn7YOR1N

If Philip doesn’t put any more thought into this attack than he has his life so far then he has no feelings for anyone but himself. Until Philip learns to care for someone else, he doesn’t need to be in any kind of relationship.

Be sure to catch up on everything happening with Days right now. Come back here often for Days Of Our Lives spoilers, DOOL rumors, soap opera news, and NBC Days comings & goings updates.