Eastenders Spoilers: Kathy’s Revenge, Sharon Wakes To Men Tossing Her Stuff Out Of The Vic 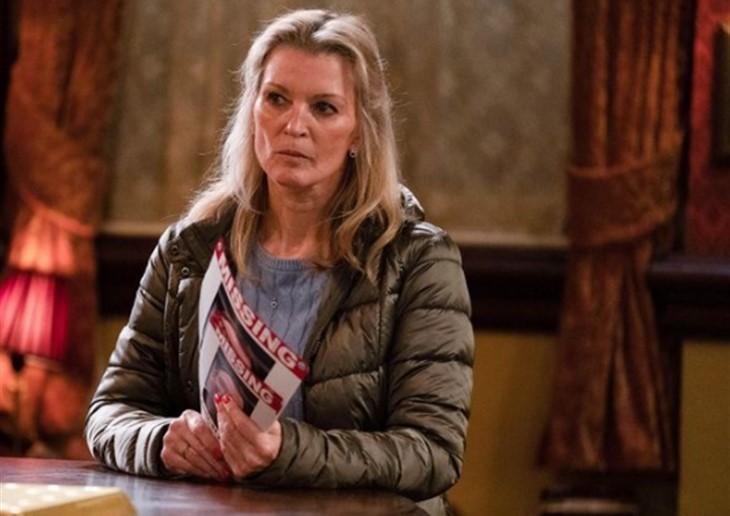 Eastenders spoilers reveal that in Walford Kathy Beale (Gillian Taylforth) is getting more frantic about Ian Beale (Adam Woodyatt). Meanwhile, Sharon Beale (Letitia Dean) is running The Vic and acting like everything’s fine. Kathy takes action and one morning, Sharon has a rude awakening… literally. Men are in the pub and they are hauling all of her belongings out of the building.

Eastenders spoilers reveal that Kathy is growing increasingly worried that she’ll never see Ian again. They had their issues, but they are family. Sharon has been questioned about her husband’s sudden disappearance, but won’t admit to anything. Kathy has always suspected Sharon did something to Ian. But as time goes on she becomes more convinced of it. She doesn’t think it’s fair that Sharon gets to run The Vic and have everything Ian gave to her when nobody knows if he is even alive or not.

According to the new issue of Inside Soap magazine, Kathy is fed up and decides to take action. She knows exactly what she’s going to do about her daughter-in-law. She makes all the arrangements and Sharon will literally get a rude awakening.

Eastenders Spoilers: Sharon Flees As Secrets Emerge, Kathy Swoops In On The Vic?

Eastenders spoilers reveal that one morning, Sharon wakes up to find that she’s not alone. No, it’s not Kathy or anyone else she knows. There are a bunch of men in The Vic and they are hauling all of her stuff outside. The delivery men were hired by Kathy, who has decided Sharon doesn’t deserve to be in The Vic. Kathy wants her out immediately because the pub belongs to Ian. Kathy will take care of the place while she continues searching for answers.

A source told the magazine that Kathy holds Sharon 100 percent responsible for Ian’s disappearance. She claims to not know where Ian is, but for someone who supposedly loved Ian, she sure isn’t acting concerned. As Kathy steps up the search, an investigation might not be too far behind. Once Kathy learns of Sharon’s activities during the short marriage, the police could demand she tell them all the details.

Max Branning (Jake Wood) figured out Sharon’s poisoning plot and dragged Ian to a doctor. When this information comes out, Sharon will explain that Ian really left on his own. However, Sharon needs Ian’s body to prove he’s alive. At the same time, without a body, police are going to have a hard time proving murder. It should be interesting to see how this story unfolds in the next few weeks. How will this storyline end and what is Sharon going to do about Kathy, Max, and The Vic?