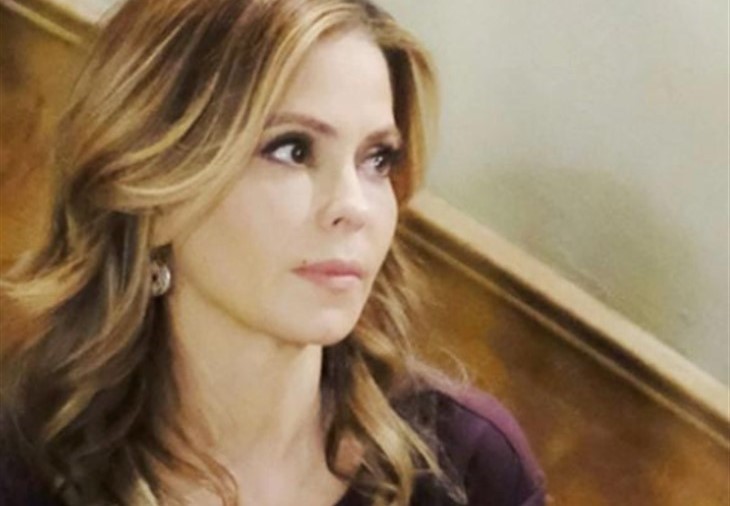 General Hospital (GH) spoilers tease that in Port Charles, NY Olivia Quartermaine (Lisa LoCicero) has had ENOUGH of Alexis Davis (Nancy Lee Grahn) and her drunken antics! General Hospital viewers will recall that after she found out her son would be okay, she made a vow to God that she would make that drunken, murderous @#^*&^ PAY!

General Hospital viewers will remember that Olivia has been nothing but kind and compassionate to Alexis. Alexis had gone off the deep end and fallen off the wagon after finding her boyfriend, Dr. Neil Byrne (Joe Flanigan) dead in her bed of a drug overdose. Alexis had no idea Neil was using, and a used syringe was found under her bed. This was after losing her law license, and him his medical license over a conflict of interest – she had been his patient. They had lied about their tryst in New York City before the medical board but didn’t know there was a witness – Britt Westbourne (Kelly Thiebaud)!

Britt then came back to Port Charles briefly and had taken a position at General Hospital – and a fling with Alexis’ ex-husband, Julian Jerome (William DeVry)! He had found out from Britt about Neil and Alexis in New York, and went into a jealous rage and tried to take out Neil as he was accepting a position at GH in Dr. Kevin Collins’ (Jon Lindstrom) office in front of Britt – she had enough and quit her job and left town again until Cyrus Renault (Jeff Kober) lured her back with a job offer she couldn’t refuse. Olivia knew that history and felt sorry for Alexis and was trying to help her after Tracy Quartermaine (Jane Elliot) set her up for an arrest for drunk driving. She even helped Sam McCall (Kelly Monaco) prove it!

GH Spoilers – Hell Hath No Fury Like A Woman Scorned

Tracy, in her own twisted way, had been trying to help Olivia by setting up Alexis – to keep Ned Quartermaine’s (Wally Kurth) one night stand with Alexis a secret. Tracy had rationalized if Alexis was in jail or preferably in rehab, she couldn’t shoot her drunken mouth off to Olivia! But it all backfired on her when her plot was exposed and she was taken off to the Port Charles Police Department! And Olivia found out the truth about Alexis and Ned, and that wasn’t the worst of it. Shortly thereafter, she got a call from General Hospital that something had happened to her son Dante Falconeri (Dominic Zamprogna)! It turned out, as General Hospital viewers will remember, that in response to Peter August’s (Wes Ramsey) exposé article revealing Franco Baldwin’s (Roger Howarth) brain tumor had returned, Alexis freaked out!

She and Sam had gone to GH and saw Franco start to have another episode and collapse, and Sam had reached out to steady him. From Alexis’ viewpoint, which was an empty examining room where she had hid out to empty a bottle of liquor she had hidden in her purse, she thought Franco was grabbing Sam and attacking her! Not likely, with Elizabeth Baldwin (Rebecca Herbst) standing right beside him! But all Alexis saw was her fear. However, Dante, who had been programmed by Liesl Obrecht (Kathleen Gati) to protect Franco, saw what was taking place and jumped in front of Franco just as Alexis was charging towards him with a syringe! Dante was stabbed instead of Franco, and nearly died from the syringe full of lidocaine! Olivia arrived when he was being treated and found out Alexis had stabbed him!

After the panicky mama went in the hospital chapel to pray, where her good friend Robert Scorpio (Tristan Rogers) sat beside her and Ned barged in where Olivia didn’t want him, Dr. Portia Robinson (Brook Kerr) came in and told a relieved Olivia that Dante would be okay. After that, Olivia left the chapel and spoke up towards heaven. She made a vow to God that Alexis would pay for breaking up her marriage and nearly killing her son! Just exactly how Olivia plans to channel her inner Bensonhurst brawler remains to be seen – in future General Hospital episodes!