The Bold And The Beautiful (B&B) Spoilers: Too Much Stress Causes Complications For Steffy’s Pregnancy 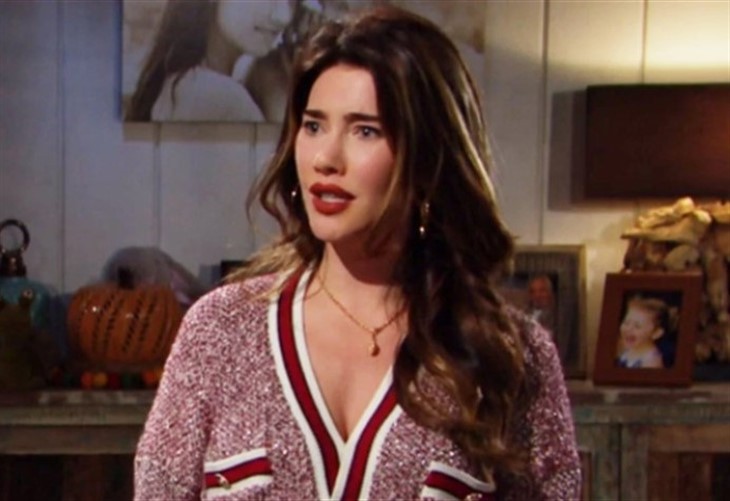 The Bold and the Beautiful (B&B) spoilers indicate that in Los Angeles Steffy Forrester’s (Jacqueline MacInnes Wood) pregnancy will be filled with health complications. During a visit with Dr. Campbell (Tina Haung), Steffy was warned that stress isn’t good for a pregnant woman.

Steffy is already dealing with enough on her plate as she tries to determine who her baby’s father is. Odds are she’s going to be more stressed out in the coming months, which could mean danger to her and her baby’s health.

Steffy’s life has always been filled with drama, and just when it looked like she had found peace, something comes along to ruin it.

Steffy’s budding relationship with Dr. John “Finn” Finnegan (Tanner Novlan) may be on the brink of ending due to her one-night stand with ex Liam Spencer (Scott Clifton).

Not only has Steffy caused problems in her relationship, but also in Liam and Hope Logan’s (Annika Noelle) marriage. A paternity test will decide the fate of both couples, but no matter what the results say, nothing will ever be the same again.

The Bold And The Beautiful Spoilers: Brooke’s Surprising Deal – Thomas Almost An Ally

B&B Logans Confrontations With The Logans

When Liam confessed about his night with Steffy, Hope didn’t waste any time in confronting Steffy about her actions. Hope’s hurt by Liam’s betrayal, and moving forward she won’t be able to trust her husband around Steffy.

Whether the child is or isn’t Liam’s, Hope and Steffy’s rivalry is bound to continue with Hope setting up boundaries. Aside from Hope, Steffy will also feel the wrath of Brooke Logan (Katherine Kelly Lang).

Steffy and Brooke have had plenty of confrontations in the past about Hope and Liam. When Brooke finds out Steffy may be pregnant with Liam’s child, she’s going to go ballistic. She won’t resist the chance to tell off Steffy and issue a warning to stay away from Hope and Liam.

The doctor’s comments about stress has fans speculating that problems are going to arise during Steffy’s pregnancy. With the paternity test, Liam and Finn fighting over the baby, and Hope and Brooke breathing down her neck; it’s going to be too much for Steffy.

Eventually, a stressed Steffy will be hospitalized, and from there the story could play out in different ways. One is that under the doctor’s orders, Steffy needs to relax. She decides to leave town until this situation blows over, then comes back in time to give birth. Another scenario is one that fans will dread, and it’s Steffy losing the baby.

Already B&B viewers are concerned that the direction this storyline is headed. Steffy has made it known she’d love to give her daughter Kelly Spencer (Avalon and Colette Gray). When she found out she was pregnant, she was excited, even though it did put her in a tough situation regarding the child’s father.

Although her pregnancy has created turmoil for everyone, Steffy is ready to be a mom again. However, she may have her dream dashed due to health complications.