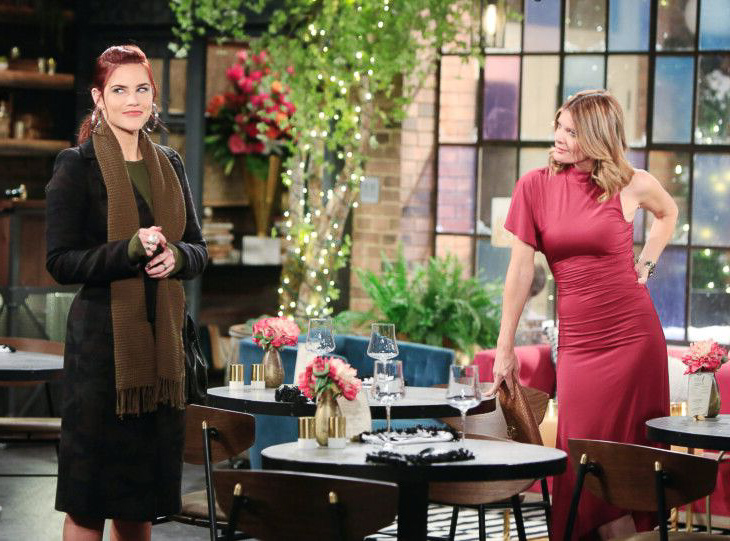 The Young and the Restless (Y&R) spoilers tease that in Sally Spectra (Courtney Hope) will soon realize that she’s got yet another person working against her in Genoa City. As Y&R viewers know, Sally ran into a big roadblock when she encountered Summer Newman (Hunter King) and Kyle Abbott (Michael Mealor) at Jabot. Summer got the job at JCV that Sally wanted, while Sally got relegated to being an assistant at Fenmore’s.

Well, once Summer realized that Sally was after her job, that sparked a war between the young women. The “frenemy” situation turned a bit more contentious when Summer got the full scoop about Sally on a recent trip to Los Angeles, and then Summer shared her concerns about Sally to her mom. Now Phyllis is wary of Sally.

Well, it wasn’t long after Phyllis learned about Sally and Summer’s rivalry until she encountered Sally over at Society making nice with Jack Abbott (Peter Bergman). That seemed to rub Phyllis the wrong way, and as Y&R viewers know, Phyllis promptly approached Jack wondering what he was doing with Sally.

It certainly looks like we’re headed for a situation in which Sally and Jack start getting closer. Sally and Jack already rode out the ice storm together over dinner and drinks, and they bonded over each having been abandoned as a child – Jack by his mother and Sally by her parents. It probably won’t be long until a romance starts blossoming here.

The Young And The Restless (Y&R) Spoilers: Sally Does Some Digging, Shocked By What She Finds Out About Kyle

But now that Phyllis has decided that she’s against any and all things Sally, she’s probably going to be keeping a close eye on Summer’s nemesis. Phyllis will probably set out to protect Jack from Sally at all costs, too. In fact, we wouldn’t be surprised if Phyllis does some spying on Sally and Jack, with the goal being to ruin any chance that Sally has with the Abbott heir.

Phyllis could even team up with Summer and Kyle to make sure that Jack is “saved” from Sally. Sally could find herself up against a formidable team as she tries to get closer to Jack. Who knows, Phyllis might even be the one to tell Jack about Sally’s terrible past in Los Angeles – that is, how Sally faked a terminal illness to hold onto a man and ended up kidnapping someone in the process.

At any rate, Sally had better watch out, because once Phyllis gets involved, she’s going to have a real challenge on her hands! Do you think Phyllis will interfere with Jack and Sally’s burgeoning relationship? Keep up with the CBS soap and we’ll keep you informed on all the hot new Young and the Restless spoilers and news.