Days Of Our Lives Spoilers: Gwen Shell-Shocked By Revelation, But It Changes Lives Forever 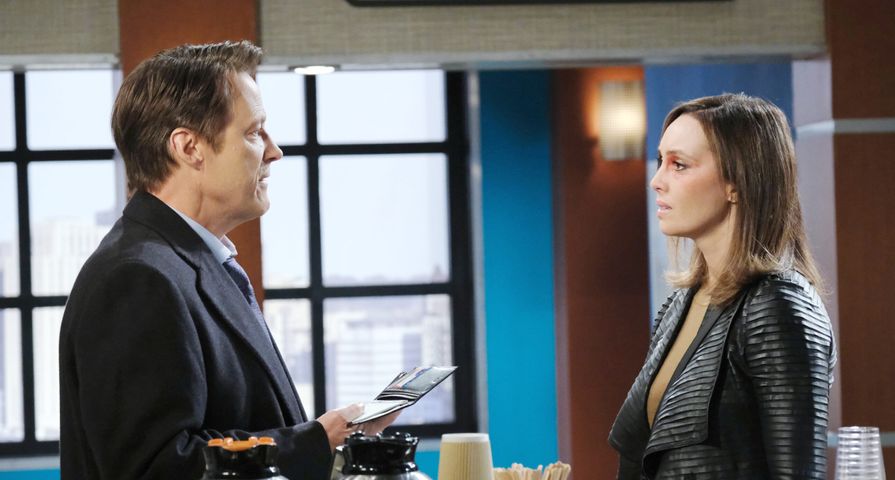 Days of Our Lives (DOOL) spoilers reveal that in Salem Jack Deveraux (Matthew Ashford) goes to see Gwen Rizczech (Emily O’Brien). He accidentally lets it slip that Laura Horton (Jaime Lyn Bauer) is actually responsible. Then he asks her to stop going after Abigail DiMera (Marci Miller). Gwen is left shell-shocked by the revelation, but then another event ends up changing lives forever.

DOOL spoilers reveal that Jack goes to see Gwen with the intention of getting to know her. While they talk, Gwen makes it clear that she wants her father to fix the problem. Of course, Jack never knew Gwen even existed and it’s unfair for Gwen to be attacking everyone because she feels like she missed out. Jack understands that Gwen is a wounded little girl in a grown woman’s body. So he tells her that he doesn’t know how to fix it, but he’s going to figure out how he can make things right.

During the conversation, Jack lets it slip that Laura was the one who is responsible for everything. Gwen picks up on it but doesn’t say anything about it. Instead, her mind is reeling from this new information. All of her life, she has blamed Jack and Abigail for the life she thinks she should have had. She feels that Abigail got everything she was entitled to. Now she’s finding out that everything she believed her whole life was a lie. That all of her anger has been targeted at the wrong people.

Days Of Our Lives Spoilers – A Special Request

Days of Our Lives spoilers reveal that Jack has one more thing to say before he leaves. He asks Gwen to please stop going after Abigail. He explains that it isn’t Abigail’s fault that Gwen had to grow up without a father. She’s as innocent in the situation as Gwen is. She quietly thinks about this and she knows Jack is right, but she doesn’t want to stop getting revenge. She has waited her whole life to make Abigail feel her pain and now she is being asked to stop. That is a pretty tall order and Gwen doesn’t know if she can do it.

After Jack leaves, there is another knock at the door. Gwen opens it to find herself staring at the woman who is really responsible for her pain. It’s Laura, who has come to confess the truth about what happened all those years ago. However, things get out of control and all of the rage that Gwen feels ends up being directed at Laura. Things spiral and suddenly, Gwen finds herself in a huge mess that she doesn’t know how to get out of.

What does Gwen do to Laura? Does she assault her and leave her unconscious or in a coma? Or perhaps it’s something much worse. Could Gwen actually end up killing Jack’s mother-in-law? We will have to keep watching the NBC soap to find out how this story ends.