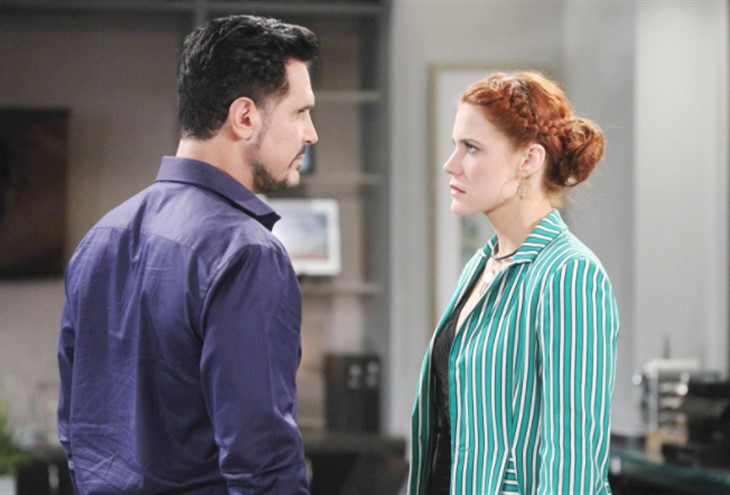 The Young and the Restless (Y&R) spoilers tease that Genoa City will get a very special visitor during the week of February 8-12. The Bold and the Beautiful’s Bill Spencer (Don Diamont) will make a crossover appearance on Y&R, making his on-screen Genoa City debut. It appears that Bill will come to Genoa City to meet with Lauren Baldwin (Tracey E. Bregman) and Summer Newman (Hunter King) regarding his collaboration with JCV.

As Y&R viewers know, Summer and Kyle Abbott (Michael Mealor) recently did a crossover with B&B during which they went to Spencer Publications in Los Angeles to arrange for the collaboration between the publishing house and JCV. But once Bill gets to Genoa City, he might soon run into a familiar face – Sally Spectra (Courtney Hope).

Bill and Sally know each other well, as Bill famously blew up the Spectra Fashions building in Los Angeles a couple of years ago…while Sally was inside the building! And Sally threatened to shoot Bill at one point, so the animosity between them goes both ways. But Bill’s probably going to have Sally’s most recent antics on his mind – that is, how Sally faked a terminal illness to hold onto Bill’s son Wyatt Spencer (Darin Brooks).

Sally’s faked terminal illness is something that she’d really like for people in Genoa City not to know about since she’s trying to make a fresh start there. Right now, Summer and Kyle know all about Sally’s past, but they seem to be willing to keep the information under wraps as long as Sally stays inline

But Bill is another story. Bill tends not to keep his mouth shut about things at all, so we wouldn’t be surprised if he blurts out the truth about Sally’s sordid past to anyone who will listen. In fact, once Bill learns that Sally works for Fenmore’s, he might just tell Lauren a thing or two about her assistant. And whatever Lauren leans will certainly make its way to Jack Abbott (Peter Bergman) in short order.

Of course, Sally and Jack have forged a newfound friendship that might be blossoming into something more than friendship down the line. Jack has seemed pretty taken in by Sally thus far, but he may be dismayed to hear about Sally’s past. Bill could end up doing some serious damage to Sally’s relationship with one of her only allies in Genoa City!

We’ll see what happens here, and if Bill does “out” Sally’s secrets. It would certainly make sense for Bill to want to warn Lauren and Jack about what they’ve gotten into with Sally. Do you think that Jack will put the brakes on his friendship with Sally as a result? Stay tuned to the CBS soap and we’ll keep you up to speed on don’t forget to check HH often for the latest Young and the Restless news and spoilers.