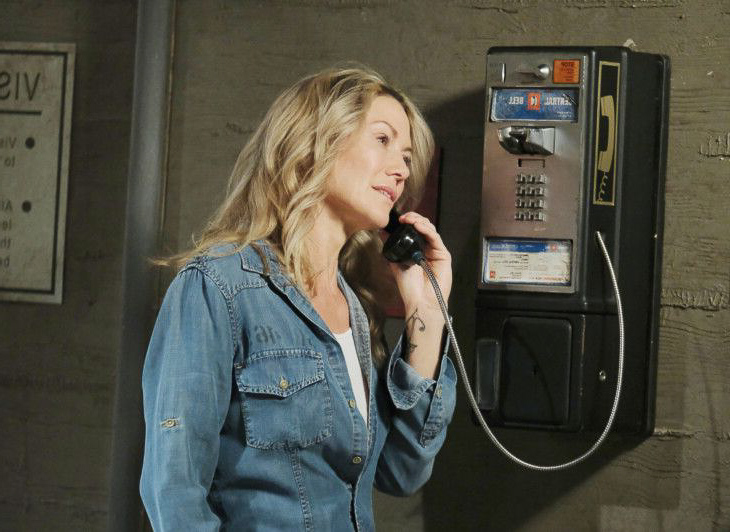 Days of Our Lives (DOOL) spoilers tease that in Salem Kristen DiMera’s (Stacey Haiduk) desperate escape from prison and her actions toward Chloe Lane (Nadia Bjorlin) may lead Brady Black (Eric Martsolf) to break up with Kristen for good. As viewers know, Brady was shot because of Phillip Kiriakis’ (Jay Kenneth Johnson) issues with the mob. Once Kristen learned of Brady’s injuries, she became desperate to see her lover and takes her brother Tony DiMera (Thaao Penghlis) hostage in order to facilitate her escape.

Days Of Our Lives Spoilers – Kristen DiMera is already jealous of Chloe Lane.

Already jealous of Chloe after seeing a newspaper clipping of Brady and Chloe sharing a kiss on New Year’s Eve. Kristin was livid and even though Brady explained that the kiss was completely platonic, Kristin was apparently not convinced. When Kristen makes it to Brady’s hospital room, she is so angry at Chloe’s presence that she pulls her gun on Chloe and may have shot her had John Black (Drake Hogestyn) not arrived in time to calm Kristen down. But Kristen has made it clear that will go after Chloe, regardless of whether or not she is in prison.

Although Brady will surely be touched that Kristen was so desperate to see him that she staged a jailbreak, he won’t be unhappy that her actions will most likely lead to even more time being added to her sentence. And not only that, threatening to kill Chloe will only serve to anger Brady. Brady will always love Kristen, but he may have to take a hard look at his future and it seems more and more likely that Kristen won’t be in it, at least not in a romantic sense.

Days Of Our Lives Spoilers: Gabi Strikes A Deal, But What Is Philip Getting Out Of Fake Romance Scheme?

Days Of Our Lives Spoilers – Does Brady Black Really Want Chloe Lane, Or Does He Just Not Want Her With Phillip Kiriakis

If Brady does decide to pursue Chloe romantically, he will have to decide if she truly wants to be with the opera singer or if he simply doesn’t want Phillip and Chloe to get romantic. But if Chloe does decide to be with Brady down the road, she will do so knowing full well that Kristen will likely come after her again. That by itself may convince Chloe to choose Phillip!

Days Of Our Lives – What Will Happen?

Will Kristen lose Brady after her prison break and threats to Chloe? Will Brady wash his hands of Kristen and pursue Chloe for real? But does Chloe even want to be with Brady, or is she more interested in Phillip? Love is complicated is Salem, so stay tuned to Days of Our Lives airing on weekdays on NBC. And don’t forget to check back right here regularly for all your Days of Our Lives news, information, and spoilers!