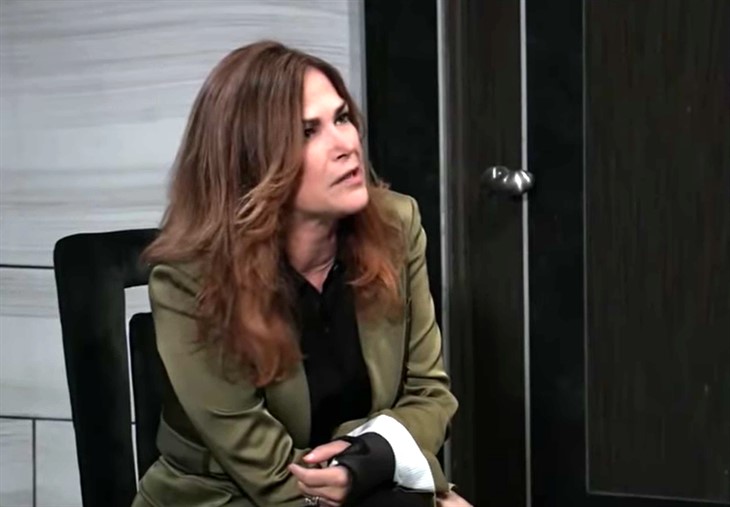 General Hospital (GH) spoilers suggest that in Port Charles, NY Jackie Templeton (Kim Delaney) will continue her quest to meet with Bobbie Spencer (Jackie Zeman). Bobbie has no idea that Jackie is looking for Florence Gray (Annie Abbott). Jackie claims that she simply wants to catch up with Bobbie. Will Jackie lead Cyrus Renault (Jeff Kober) to his mother putting Bobbie in danger as well?

General Hospital’s Cyrus has been trying to find his mother since she disappeared from her long-term care facility. Cyrus fired Bobbie from the hospital over Wiley Corinthos’ (Theo and Eric Olson) surgery. If Cyrus finds out that Carly Corinthos’s (Laura Wright) mother is responsible for watching over his mother, he could retaliate. Jackie could lead Cyrus to Bobbie allowing him to kidnap her turning the tables on Jason Morgan (Steve Burton) and Carly. Will Cyrus use Bobbie to control Carly and Jason after getting his mother back?

General Hospital’s Bobbie is just doing her job by watching over Florence. Bobbie is helping her daughter by watching over Florence, however, Bobbie also needs a paying job since she got fired from G.H. Carly would support Bobbie if she would allow it but Bobbie wants to support herself. Bobbie is seeing that Florence gets the best care possible. Bobbie wants to take care of her patient no matter what. Bobbie has no idea that Jackie could be sitting her up using their past connection. However, Jackie could certainly be putting Bobbie’s life on the line by hunting her down to locate Florence. Does Jackie know that Bobbie could lead her to Florence or is this just a lucky break?

General Hospital Spoilers – Does Jackie Templeton Want In The Middle Of A Mob War?

General Hospital’s Jackie may be an ace reporter but she is placing herself right in the middle of a mob war. Cyrus is ruthless and Jackie could be putting a lot of innocent lives in danger but following through with this. Martin Gray (Michael E. Knight) has tried to get Jackie to drop this on Valentin Cassadine’s (James Patrick Stuart) urging. Valentin knows that this could get messy but he wants to tie Carly up in anything he can. Perhaps Valentin is playing Jackie by telling her to stop searching. Is Valentin trying to push the war between Cyrus and Jason? Is Valentin trying to get revenge for Nina Reeves (Cynthia Watros)?

General Hospital’s Jackie could get her son Harrison Chase (Josh Swickard) involved in this mess as well. After all, Jordan Ashford (Tiffany Daniels) offered to help if Cyrus provided her with evidence. Could Chase get caught in the crossfire when the truth comes out?