General Hospital Spoilers: Will Nina Realize That Sonny Is With Phyllis Caulfield? 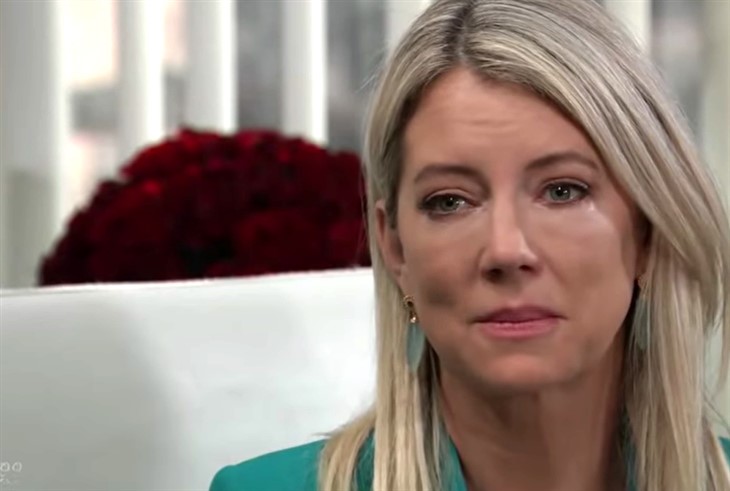 General Hospital (GH) spoilers tease that in Port Charles, NY Nina Reeves (Cynthia Watros) is about to put herself first for once. For too long, Nina has found herself in a relationship with a man who chose their own agendas over being honest with Nina. It was bad enough when Valentin Cassadine (James Patrick Stuart) hired Sasha Gilmore (Sofia Mattsson) to pretend to be Nina’s long lost daughter.

When the truth came out, Nina dumped Valentin at the altar in front of everyone in Port Charles. Almost immediately thereafter, Nina struck up a friendship with Jasper “Jax” Jacks (Ingo Rademacher) that eventually blossomed into love. Jax was well aware of the lies Valentin told, so Nina was disappointed that Jax took it upon himself to keep the fact that Nelle Benson (Chloe Lanier) was Nina’s true daughter to himself.

Because Carly Corinthos (Laura Wright) didn’t want Nina to look into the way Nelle died, even though she told Jax it was to protect Nina. So even though Nina is furious with Jax, it’s really Carly who Nina resents. She’s already made it clear that she wants to have a relationship with her grandson, Wiley Corinthos (Erik & Theo Olsen). It likely won’t be long before Nina decides to sue for some sort of custody arrangement. But another way to punish Carly may have just presented itself right in Nina’s lap.

Sonny Corinthos (Maurice Bernard) has been missing and presumed dead since the footbridge he was standing on collapsed underneath him, plunging Sonny into the icy water below. Sonny survived but has no memory of his former life, including his wife Carly. Coincidentally, Sonny ended up in the care of Phyllis Caulfield (Juliette Jeffers), the same nurse who cared for Nina all those years ago and delivered her baby girl to a family in Florida. Phyllis wasn’t doing anything malicious, she thought Nina would be in a come for the rest of her life and unable to care for her child. The truth is that Nina remained in a coma for 20 years and wasn’t even sure if she actually even gave birth.

If Nina realizes she was speaking to Sonny, she may decide to keep the information to herself. Before the Nelle revelation, Nina would have absolutely gone straight to Carly or Jason Morgan (Steve Burton) to let them know the mob boss is alive and well. But now that Nina knows that Carly kept her daughter’s identity a secret from her, she has no reason to help Carly reunite with her husband. But Nina will most certainly want to see for herself if Sonny is staying with Phyllis and has no memory. Once she gets confirmation, it will be interesting to see what Nina does!

Does Nina have every reason to be angry with Jax and Carly? Will she recognize Sonny’s voice? And what will she do with that information once she gets confirmation? Will Nina be responsible for Sonny reuniting with his family or will she decide to keep what she knows to herself? Payback is hell in Port Charles so stay tuned to General Hospital airing weekdays on ABC. And don’t forget to check back right here regularly for all your General Hospital news, information, and spoilers!