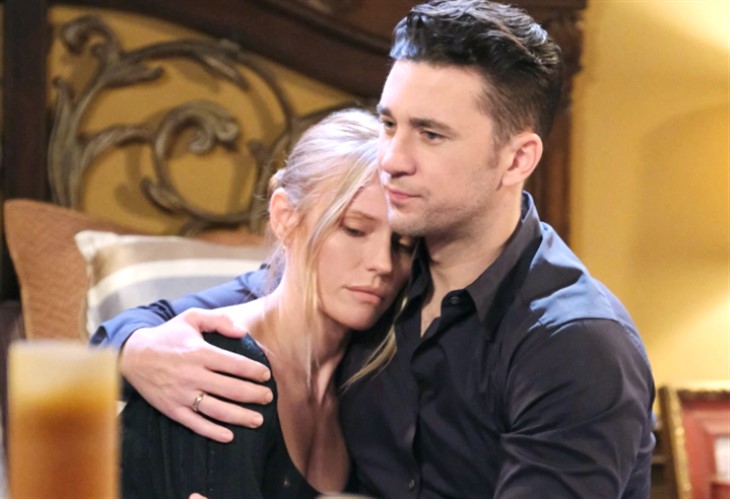 Days of Our Lives spoilers for the week of February 15 reveal that in Salem Chad DiMera (Billy Flynn) helps Abigail DiMera (Marci Miller) as she copes with a family tragedy. This seems to suggest that Gwen Rizczech (Emily O’Brien) kills Laura Horton (Jaime Lyn Bauer). However, Jack Deveraux (Matthew Ashford) may end up confessing to the crime to protect his daughter.

DOOL spoilers reveal that Abigail will learn some devastating news regarding her loved ones. She discovers that there has been a family tragedy and breaks down. Of course, the only family tragedy we can think of is regarding Laura. This is because Soap Opera Digest confirmed that Laura meets Gwen privately and tries to explain what really happened all those years ago. Gwen doesn’t believe her at first but then has to accept that it really is the truth. All of the rage that she felt her whole life toward Abigail and Jack ends up being directed at Laura.

It is confirmed that Abigail decides to move back into the DiMera mansion with Chad. He is thrilled, but the very next week, the two are struggling with the family tragedy. As Abigail tries to understand what exactly happened, she will lean on Chad, who tries to be as supportive as he can.

Days of Our Lives spoilers reveal that when Gwen directs all of her rages at Laura, the psychiatrist could end up dying. At first, it seemed that the soap might not go that far. After all, soaps have the goal of reuniting characters and bringing families together after conflict. We imagine that they are going to do this with Gwen at some point. However, if Gwen ends up killing Laura, Jack might stay in his daughter’s corner, but it would be an impossible act for Abigail or Jennifer Horton (Cady McClain) to forgive. However, it’s hard to imagine that “family tragedy” means survival. Those words usually mean death.

It is teased that Gwen will call Jack for help when things with Laura get out of control. Jack comes and “covers for Gwen.” So, they will either claim not to know what happened, which police wouldn’t believe since Laura’s body is in Gwen’s room. Plus, Gwen’s fingerprints will be all over the woman. It is more likely that Jack takes the fall for the crime as a way to “fix things” with his daughter. However, the truth always comes out at some point. Also, how will Abigail and Jennifer deal with Jack confessing to such a brutal crime? Will it tear the Deveraux family apart once again?

Be sure to catch up on everything happening with DOOL right now. Come back here often for spoilers, news, and updates.