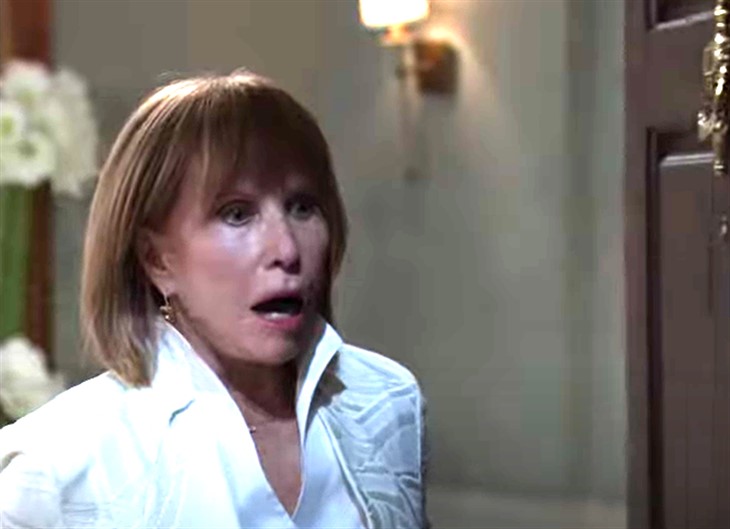 General Hospital (GH) spoilers tease that buried secrets will be revealed in this week’s General Hospital, some that were no surprises, others that are new mysteries!

Monica Quartermaine (Leslie Charleson) is obviously shocked when she opens her door. This is definitely someone she is not expecting, as all she can say is “oh my God!” Tracy Quartermaine (Jane Elliot) just left, and Monica isn’t expecting another houseguest! Could Tracy already be back? But this is the week of buried secrets being revealed – could this be someone from her past that Monica never expected to see again?

Lesley will be making a stand this week at General Hospital – is that who’s at the door? Or is another Quartermaine relative we haven’t seen in a while coming home? General Hospital viewers will recall that a few months ago, Brook Lynn Quartermaine (then Briana Lane filling in for Amanda Setton) had a one night stand with Valentin Cassadine (James Patrick Stuart) and left Port Charles pregnant to stay with her mother in Bensonhurst.

Could Brook Lynn be at the door with a little Cassadine in tow, or possibly several months pregnant? That would definitely be a shock for Monica, but nothing compared to the shock Valentin would receive, not to mention Brook Lynn’s father, Ned Quartermaine (Wally Kurth)!

GH Spoilers – Buried Secrets Confessed, More On The Way Via A Flash Drive

Hot on the heels of Valentin Cassadine (James Patrick Stuart) forcing a confession out of Peter August (Wes Ramsey) at Nathan West’s (Ryan Paevey) grave, more buried secrets are sent to Peter in a flash drive from Mommy dearest! Viewers saw Dimitri Marick (Michael Nader) looking at Alexandra Devane Marick’s (Finola Hughes) last will and testament, and the flash drive he popped in an envelope is obviously from Alex to Peter. General Hospital viewers will recall that Alex was acting very strangely around Peter, and it wasn’t lost on him.

For now, General Hospital spoilers show Peter claims Anna Devane (Finola Hughes) as his birth mother, but many viewers suspected Peter had figured out his real mother was Alex. Will the flash drive confirm Peter’s suspicions, or will there be more shocking information arriving? Could there be yet another twist in the saga of Peter’s conception and birth story? Anna, in the meanwhile, made plans with Dr. Hamilton Finn (Michael Easton) to chase down leads on Liesl Obrecht (Kathleen Gati) after she couldn’t force a confession out of Britt Westbourne (Kelly Theibaud).

At Sonny Corinthos’ (Maurice Benard) funeral, Attorney Diane Miller (Carolyn Hennesy) and Jason Morgan (Steve Burton) take notice as a funeral crasher arrives. General Hospital viewers will remember that Nina Reeves (Cynthia Watros) recently found out that Nelle Benson (Chloe Lanier) was her daughter, although she wanted to confirm with Phyllis Caulfield (Joyce Guy) by having her look at photos of Frank Benson (most recently James Patrick Stuart) and a photo of Nelle as a child.

Now Nina is at Sonny’s funeral, and confronts Jasper “Jax” Jacks (Ingo Rademacher) and Carly Corinthos (Laura Wright), sadly revealing she knows what they BOTH did to her child! It sounds like Nina has had a very successful deep dive into the circumstances around Nelle’s death. Jax was the one who bought Nelle’s kidney from Frank Benson to save his daughter, Josslyn Jacks’ (Eden McCoy) life.

For years on General Hospital the story was that it was little Jake Webber’s (Hudson West) kidney – until Lucky Spencer (Jonathan Jackson) rescued him from Cassadine Island, and it was Nina herself who published the search for Joss’s true donor in Crimson Magazine! But this may be an even more damning buried truth she’s dug up – perhaps she found out about what really happened the night Nelle disappeared and fell from that cliff! Carly hesitated when she heard her cries, and Jax told her to change the narrative!