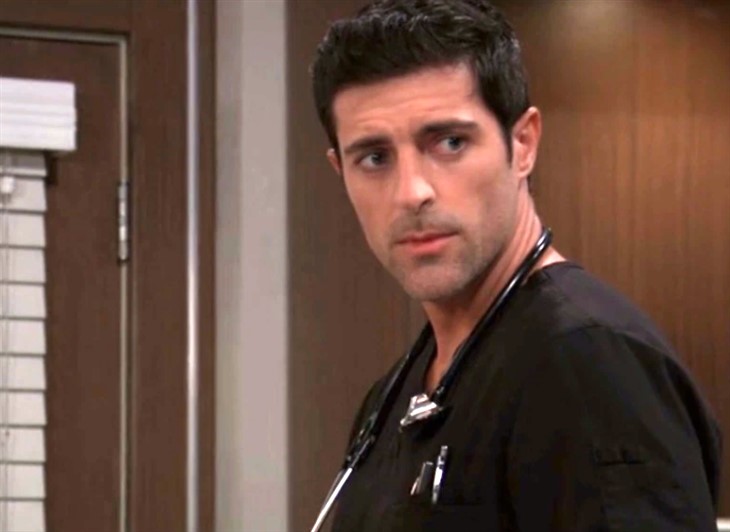 Longtime General Hospital viewers will remember that Lucas, his now ex-husband Brad Cooper, (Parry Shen), and Felix were once a triangle of sorts. Brad was dating Felix, and they got into a fight and he went to The Floating Rib to drink. There he met Lucas, and the two found that they had much in common. Both were adopted and both of their birth families had ties to the mob, Lucas to the Jeromes and Brad to the Wu Family. Felix and Lucas vied for the affections of Brad for a period of time, and Lucas won.

Since that time, Brad and Lucas married and adopted a son – who died the day he was brought home from Mercy Hospital, where the birth mother, now known to be Willow Tait (Katelyn MacMullen) had given birth to her and Shiloh Archer’s (Coby Ryan McLaughlin) son. Brad, beside himself at finding the baby dead in his crib while Lucas was at work, drove around on country roads that night not knowing what to do or how to tell Lucas the baby had died.

Happenstance brought him together with Nelle Benson (Chloe Lanier) who had given birth to Jonah Corinthos, now named Wiley Corinthos (Erik and Theodore Olson) with the help of Liesl Obrecht (Kathleen Gati). That lie went on until the little boy was over a year old, and broke up Brad and Lucas forever! Now, months past the reveal of the baby swap, Lucas is lonely and ready for love again!

Lucas, a doctor, and Felix, a nurse, have found themselves in each other’s orbit frequently at work, and Lucas has started feeling an attraction and an interest towards Felix. They have become friendly with one another, taking breaks together when they can and getting to know one another better. Felix also had been in a long term relationship with another man nearly as long as Brad and Lucas were together, and it fell apart on him right around the same time as Brad and Lucas fell apart.

Lucas has seen Brad exactly one time since he went away to Pentonville Prison, and that was when he got him as a patient. Brad had been stabbed in the prison and Lucas treated him but ignored Brad’s pleas for forgiveness. Lucas sees Felix talking to a hot guy in a corridor at General Hospital! He hadn’t realized that he had “gone there” in his mind with Felix, but he feels jealous! He also feels very awkward, but he is starting to get very attached and he feels like he has to know if Felix and the hot guy are flirting like Lucas thinks they are!

He doesn’t want to make a fool of himself, so he grabs some patient files and walks down towards the couple…he sees Felix put an arm around the guy so he hurries it up a bit. As he gets close to Felix and the hot guy he realizes it’s not what he thought – the hot guy had just lost his wife, a young cancer patient and Felix was being compassionate! Lucas manages to be professional and courteous and joins Felix in trying to comfort the bereaved young widower. But he also decides to set up something with Felix so they can talk about where they are and what they are and where they’re headed!