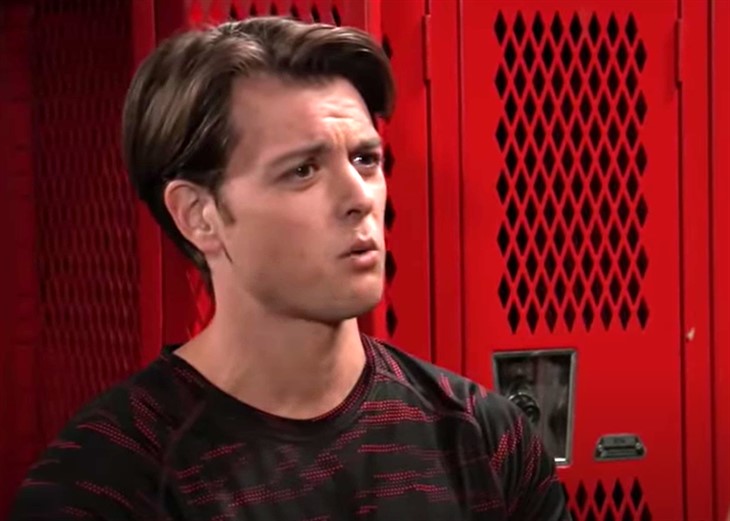 General Hospital (GH) spoilers tease that Michael Corinthos’ (Chad Duell) date will be interrupted by a process server on an upcoming episode of General Hospital!

General Hospital Spoilers – A Battle Is Brewing Over Wiley Corinthos

General Hospital viewers will recall that Nina Reeves (Cynthia Watros) recently found out that Nelle Benson (Chloe Lanier) was her birth daughter, and confirmed that Frank Benson (James Patrick Stuart) was the driver of the car that Phyllis Caulfield (Joyce Guy) delivered her baby to in Florida. She had some photos she had scanned into her phone and Phyllis had come to her office to identify him. Nina also showed some photos she had of Nelle, one of the nine-year-old Nelle wearing her half of the split heart pendant. But in order to get enough confirmation to push for split custody or at least visitation with her grandson, Nina has to have more compelling proof than that.

She has to have scientific evidence that will stand up in court; in other words, she will need to have her DNA matched with Wiley Corinthos’ (Erik and Theodore Olson) DNA. Since Carly Corinthos (Laura Wright) now thinks of Nina only as connected to Nelle, who she hates, she has already started legal action to prevent Nina from having anything to do with her grandson whatsoever, and now she has to fight fire with fire! If Nina can prove she is Wiley’s maternal grandmother then she and Carly are likely to have equal standing in family court if it indeed does come to that. Carly has already tried to bypass Michael Corinthos (Chad Duell) and Willow Tait’s (Katelyn MacMullen) custody of Wiley legally to try and keep Nina away from Wiley!

Nina will NOT be denied access to her grandson. She made a vow that Wiley will be neither a giveaway child nor a pawn used by Carly Corinthos! She now understands why Nelle fought so hard against Michael in the custody hearing – it’s not a fight against one person, it’s more like a fight against a village of people! Nina takes steps to obtain a warrant for DNA matching with Wiley towards a future custody fight with the Corinthos family.

This type of test looks for mitochondrial, or maternal DNA which would be passed from mother to child to grandchild. This test will not only prove that Nina and Wiley are grandmother and grandson, but it will also settle any question that Nina and Nelle were mother and daughter. Nina can tell how Carly is all about Carly and what Carly deems important, and nothing about anyone else!

Nina is not blind to the terrible things that Nelle did, but she also sees that she was a broken person, and if she had been able to raise her from an infant she would have been much different. Nina is a firm believer in nurture versus nature! Although Michael and Willow have signed their annulment agreement, they still have not exactly gone their separate ways.

They are finding it more difficult to move apart from each other than they initially thought, in spite of each having torches for their exes. As they have a dinner date, suddenly they are interrupted by a process server; there is a warrant for Wiley’s DNA. Michael sees Nina is the one who requested it – he realizes Nelle really must have been Nina’s daughter, or at least she is trying to prove it!