The Bold And The Beautiful (B&B) Spoilers: Brooke & Ridge On Opposite Sides of Steffy & Liam Cheating Scandal 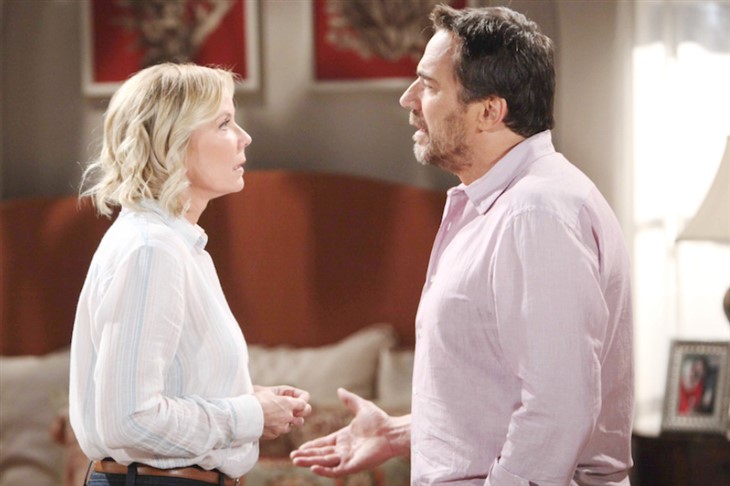 The Bold and the Beautiful (B&B) spoilers document that in Los Angeles Brooke Logan Forrester (Katherine Kelly Lang) and Ridge Forrester (Thorsten Kaye) appear to be sticking to their agreement. After a bitter Bridge break and a long repair road were traveled, they are handling the fallout from the latest family crisis.

A decision was made when Bridge most recently reconciled. They weren’t going to allow whatever problems might arise to spark trouble in their marriage. That agreement is holding, as fans of B&B’s most iconic couple have seen. But a further test is about to happen.

Brooke was very hurt by Ridge’s dalliance with Shauna Fulton (Denise Richards). As viewers know, Richards wasn’t seen in a while as part of the cooling off period that followed the Shidge arc.

It was galling that Ridge channeled his anger at Brooke, who rightly chided Thomas Forrester (Matthew Atkinson) for an extended period of time when exploring the potential of a relationship with Shauna. Ridge’s actions arguably created the atmosphere where Brooke later impulsed kissed Bill Spencer (Don Diamont).

However, Brooke held herself fully responsible for her actions. Bridge’s later reconciliation happened because both halves of this couple acknowledged responsibility and chose to value love more than personal grudges.

Steffy Forrester (Jacqueline MacInnes Wood) and Liam Spencer (Scott Clifton) weren’t in their right state of mind on the fated night in question. Liam has since admitted that something shattered inside of him back then. Steffy recognized that her willingness to believe Steam could revive, along with some alcohol she and Liam were drinking, led to the need for a paternity test.

As Steffy’s father, Ridge must stand strong. Thankfully, John Finnegan (Tanner Novlan) has been incredibly reasonable and hopeful about this matter, as he’s chosen to believe that Sinn will survive no matter who proves to be the father. Finn’s response has allowed Ridge to be hopeful for his daughter as well.

But Hope has been put in a terrible position, as Brooke understandably said. Lope is in danger of fracturing or breaking. So, Brooke remains concerned about her daughter’s future.

The Bold And The Beautiful Spoilers – Answer Eliminates Guessing Game

Because this is soap viewers know that the paternity test result could be correct or false, with a later reveal reversing reality. But the characters will likely accept the test result as a fact and move on from there.