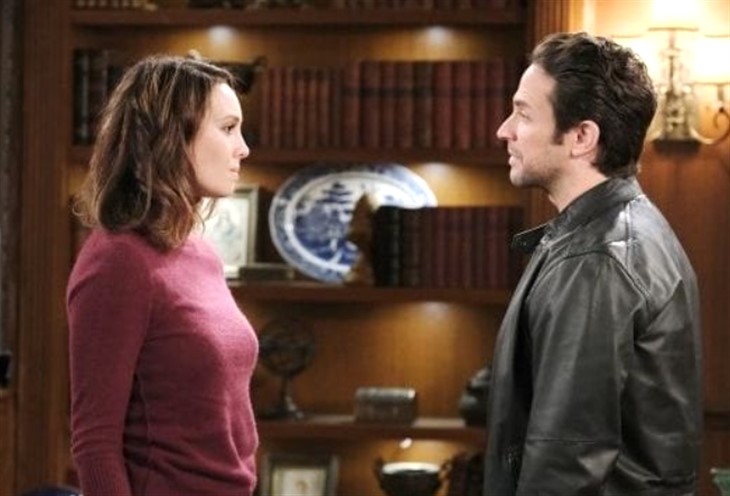 Days of Our Lives (DOOL) spoilers tease that in Salem Jake DiMera (Brandon Barash) will be suspicious in upcoming episodes of Days of Our Lives. When he hears Laura Horton (Jaime Lyn Bauer) had a fall resulting in her death in Gwen Rizchech’s (Emily O’Brien) room in the Salem Inn, he will have questions about whether she’s telling the truth and it was really an accident!

Jake knows that Gwen was out for revenge against the DiMera family and knows that she was the one who poisoned Abigail DiMera’s (Marci Miller) drink with a hallucinogenic drug which put her in a mental health care facility in Florida for several months. He also knows she has wreaked havoc on Abby’s marriage to Chad DiMera (Billy Flynn) as well as the Deveraux’s in recent months. When he hears about Laura Horton’s accidental death in Gwen’s hotel room he will have a lot of suspicions!

Days of Our Lives viewers will remember that when Laura tried to explain things and apologize to Gwen for never telling Jack Deveraux (Matthew Ashford) about her, Gwen became enraged and grabbed Laura by the shoulders, telling her she wanted revenge! Then, there was a scene near the episode that showed Gwen sitting on the floor by the bed crying in the dark, and walking over to Laura’s body – there was blood on the floor! She called her father for help. Jack knelt down on the floor and felt for Laura’s pulse but it was too late – she was already dead. Later, Rafe Hernandez (Galen Gering) arrives with other first responders after Jack calls it in. He believed that it was an accident, but Jake isn’t so sure! He knows that Gwen has a terrible temper because that’s why he left her behind in Philadelphia when he moved to Salem!

New Days Of Our Lives Spoilers: Charlie Dale Is Dead And Innocent Sami Gets The Blame, Whodunnit?

Jake lives in the DiMera mansion with his brother and Abby, who has moved back in so he cannot help but hear what happened to Abby’s grandma as she cries in Chad’s arms! He perks up when he hears Gwen’s name mentioned in relation to Laura’s death, and he asks what’s wrong and what Gwen had to do with it! Chad tells him that Laura had a fall in Gwen’s hotel room and was found dead. Gwen had called Jack in desperation, which raises red flags for Jake! Chad tells him the rest, namely that Laura apparently had gone to Gwen’s room trying to make amends, as she had been the one paying Gwen’s mother and never told Jack about his first daughter.

Abby had previously told Jake about Gwen being her older half-sister so he already knew that part. Jack had arrived to find Laura on the floor of the hotel room dead, and he had been the ones to call the police and the ambulance since he knew there was nothing that doctors could do for Laura. Jake doesn’t voice his questions in front of Abby because she is already upset enough, but wonders why Gwen didn’t just call 911 in the first place. Gwen is not one to panic and goes all helpless!

However, the more he thinks about the situation the more red flags spring up. Gwen was full of hatred and bitter enough to try to break up both the Deveraux’s and Chad and Abby’s marriage, and then delayed calling 911 when Laura “fell” and called Jack acting all helpless instead! Jake comes to the conclusion that he’d better tell someone his suspicions and determines to talk to Chad and Abby after she calms down a little bit and her grandmother’s death is not so fresh!