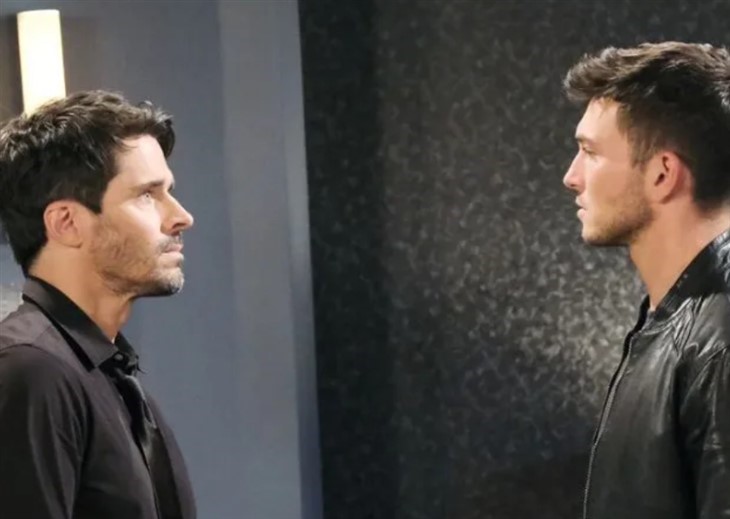 Days of Our Lives spoilers tease that Shawn Brady (Brandon Beemer) and Ben Weston (Robert Scott Wilson) will go on a frantic search for Ciara Brady Weston (Victoria Konefal) in an upcoming episode of Days of Our Lives!

Days of Our Lives viewers will remember that Ben and Claire Brady (Isabel Durant) had a heart to heart talk about soulmates and Ben feeling that Ciara was out there somewhere alive in a recent episode. Ben felt he had received a confirming sign from the universe when a photo of him and Ciara randomly fell over and opened a fortune cookie with the fortune-telling him there was always hope and to follow his heart. In her glass-enclosed prison, Ciara had received the same message in a fortune cookie. She clobbered Allan Rhodes, (Jason Downs) her captor over the head with a food tray in an effort to escape, but was not able to get free.

In a quirky coincidence, Susan Banks (Stacy Haiduk) had come to town and had stopped at Dr. Marlena Evans’ (Deidre Hall) home for a visit. Ben and Claire had gone over and Susan had a psychic vision, actually several of them, seemingly seeing everything that was going on and describing Ciara as being in “a glass box” and shooting, but Susan’s psychic ramblings could just as well have described the scene of Ciara’s presumed death in the car that blew up next to an airstrip!

Ben couldn’t be sure whether to go with that or not and had a series of dreams, one of which Ben was Romeo and Ciara was Juliet. Then, all of sudden, Ben hears from who he thinks is Ciara – the connection is not good but through the static, he hears her cry out for help! He calls Claire and tells her and they go again to Susan to see if she can identify where Ciara is at, to no avail.

Unexpectedly, Ben gets a call from his father Clyde Weston (James Read) with possible news about Ciara. He heads over there and intends to seek out Vincent Belman (Michael Teh) only to find out from Clyde that Belman committed suicide! It would seem to confirm Belman’s guilt, but then Clyde says that it’s prison gossip about the suicide part, not necessarily confirmed. He does know he’s dead.

For all Ben knows someone might have staged Belman’s suicide, but he doesn’t mention that suspicion to his father. But there is that static-filled call that he received from Ciara – he can’t prove it’s her but he can’t prove it isn’t either. He knows she is out there somewhere being held captive! He decides the only way he can find her is to find someone who can possibly trace that call if it’s not too late.

He seeks out his brother-in-law, Shawn Brady, who of course is a cop. Shawn has accepted his little sister is dead and thinks that Ben should too, but Ben tells him about the call on his phone. He asks if Shawn can trace it. He can try, but if it came from a burner phone (untraceable disposable phone) they may not be able to. Ben answered the call so it wasn’t on a recording where Shawn could listen to it either, but he finally convinces Shawn to give it one more try.

He tells him Clyde told him Belman was dead of possible suicide in the prison and the phone call is the only chance they have to find her now. He is very firm as he tells Shawn they are Ciara’s only hope and she needs them now – he finally agrees! They are able to trace the call to a location and head out, but will Ciara still be there?