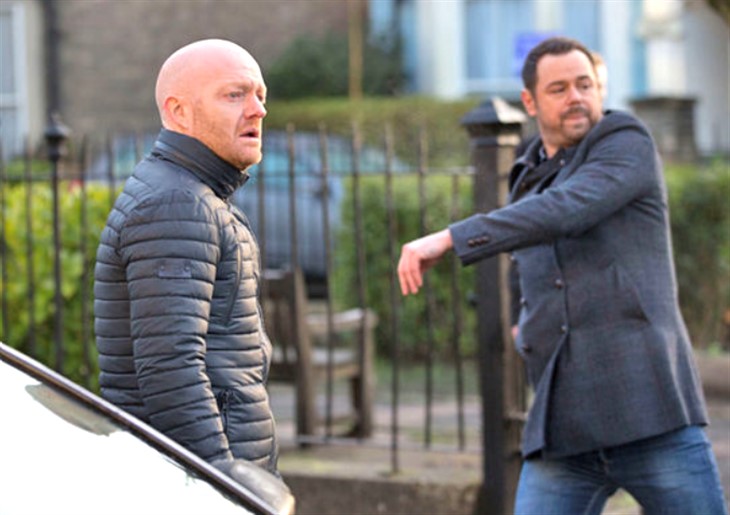 Eastenders spoilers reveal that there is a lot going on next week and it all centers around Linda Carter (Kellie Bright). Mick Carter (Danny Dyer) issues a death threat and Max Branning (Jake Wood) laughs after being punched in the face. Plus, Phil Mitchell (Steve McFadden) is blackmailed. Keep reading to find out how Linda is connected to all three of these storylines.

Eastenders spoilers reveal that Linda has made herself clear to Max. She is not leaving Mick and starting a new life with Max. However, he refuses to take no for an answer. In fact, he learns about Mick’s childhood sexual abuse and thinks that Linda is staying with him out of pity. He will end up confronting Mick and things get explosive. It ends with Mick threatening to kill Max!

Eastenders spoilers reveal that Max is so disillusioned about the love life that he tempts things even further. It leads to him getting punched right in the face. However, instead of fighting back or backing off… Max starts laughing hysterically, Inside Soap magazine reports.

While we are on the topic of Max, he ransacks Jack Branning’s (Scott Maslen) house looking for something he can use as leverage. He ends up finding it. He takes all the evidence and brings it to Phil. He blackmails Phil into helping him win Linda and not wanting to go to prison, he agrees. However, Phil isn’t the type of guy that you blackmail and get away with it. Phil will find a way out of this and turn the tables, that’s for sure.

Meanwhile, Sharon Beale (Letitia Dean) is thinking about her past with Phil., It’s around the anniversary of Denny Rickman’s (Bleu Landau) death, so that’s all mixed in with her emotions. Linda warns Sharon not to go back to Phil, but will she listen?

#Eastenders Spoilers: Kathy’s Revenge, Sharon Wakes To Men Tossing Her Stuff Out Of The Vic https://t.co/KAPLsuujsJ

According to the magazine, all of these storylines center on one unsuspecting character. Of course, we are talking about Linda. The actor explains, “Jake has lost the plot in some ways. He reckons that holding Phil to ransom will spark a chain of events that will get Linda back — though I think that Max is deluded in terms of what he wants and what he can get! Linda’s made it clear that she doesn’t want a relationship anymore, but Max isn’t taking no for an answer…”

What do you think is finally going to lead to Max Branning’s big exit? Will Mick Carter actually kill him? Will Phil Mitchell punish him for blackmailing him? Or will he finally realize that he’s never getting Linda Carter in his bed ever again?