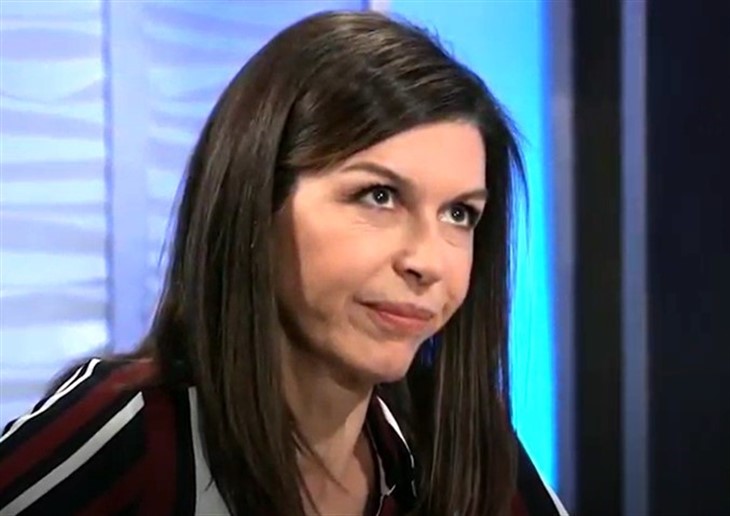 General Hospital viewers will recall that Anna has realized that Peter has been lying, as she and Valentin Cassadine (James Patrick Stuart) discussed what Franco Baldwin (Roger Howarth) heard Peter saying through the surfacing memories of Drew Cain (Billy Miller). They realized, especially Valentin, that Peter had much more responsibility in the kidnapping of Drew from Afghanistan and the imprisonment of Jason Morgan (Steve Burton) in the Boronsky Clinic for five years. Valentin confronted Peter as he was visiting his half-brother Nathan West’s (Ryan Paevey) grave in a recent GH episode, and got the whole truth of Peter’s crimes out of him.

Needless to say, Valentin, who had looked out for and mentored Peter since he was a baby was very disappointed in him. He promised to keep Peter’s secrets but he may find himself returning Peter’s lies with a lie of his own! Anna, in the meantime, decides to reach out to Peter on her own, with some important but delicately phrased questions of her own to determine if Peter really was more than just a pawn of Helena Cassadine (Constance Towers) when Drew and Jason disappeared. She also hopes to tease out of him any other relevant information that may pertain. Anna knows that she must question Peter very carefully, so as not to arouse his suspicions to the fact that he is being interrogated.

Anna invites Peter for some tea and talks about Maxie Jones (Kirsten Storms), the baby girl she and he are expecting, and the double wedding that they have planned. Casually, she brings up the subject of Liesl Obrecht (Kathleen Gati) and how it angered her that she had plotted to frame Peter for her crimes! Anna watches Peter’s eyes and his body language very carefully as she talks and asks some pertinent questions, such as what he would have done to defend himself had Liesl’s plotting not succeeded. She notes Peter came across as relieved when she mentioned Liesl having framed him, but his eyes shifted and he crossed his arms, moving into a “closed” defensive posture as she asked him how he would have defended himself.

He deflects, saying there really was no point to even thinking of any type of defense or plan of action since he and Anna both know that Liesl is guilty and her frame-up of him didn’t work! She notes he looks rather menacingly into her eyes when he tells her that both of them know that Liesl is guilty! It definitely seems like a non-verbal threat! As Anna then changes the subject and comes back to it from another direction, Peter’s non-verbal communications and body language again change to defensive and sometimes threatening. She doesn’t get him to admit to anything or let anything pertinent slip, but she definitely can tell he’s lying to her about the crimes that Liesl was charged with and wonders if it was Peter who framed Liesl, not the other way around!