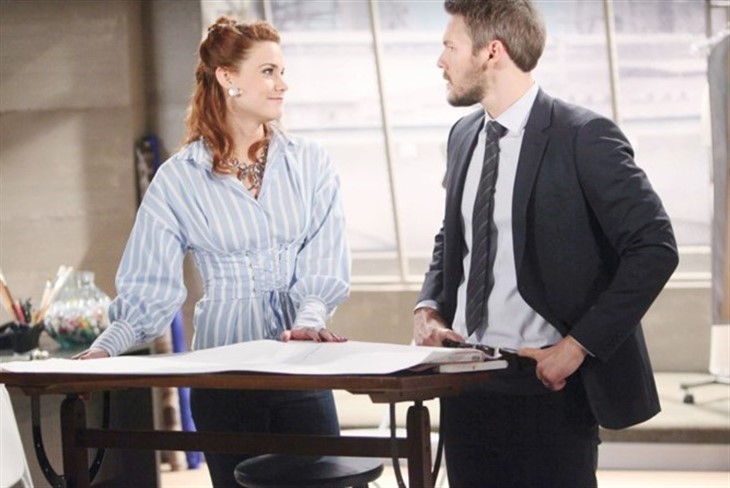 The Bold and the Beautiful (B&B) Spoilers indicate that in Los Angeles Liam Spencer (Scott Clifton) will help out his old friend Sally Spectra (Courtney Hope).

His visit comes weeks after Summer Newman (Hunter King) and Kyle Abbott’s (Michael Mealor) trip to Los Angeles, where Flo Fulton (Katrina Bowden) filled Summer is about Sally’s past. Sally’s nervous about her past with the Spencer’s coming out and that may happen with Bill’s visit to Jabot.

Sally fans are worried that Bill will badmouth Sally to Jack and Lauren, which will lead to the fashion designer losing her job. Many feel this is unfair to Sally because Bill and Flo have done way worse stuff than her, yet haven’t been punished for their actions.

Bill finally has the opportunity to get back at Sally and destroy her life. However, there is one person who won’t be happy with Bill’s actions. Upon his return to Los Angeles, Bill informs Liam of his trip and Sally’s job at Jabot.

Liam and Sally were friends, and he sided with her in Bill’s plot to ruin her business. When Liam learns that Bill may have potentially gotten Sally fired from her job, he decides to take matters into his own hands.

Liam currently has his hands full with the ongoing saga with Hope Logan (Annika Noelle) and Steffy Forrester (Jacqueline MacInnes Wood). But he may take a break from his personal crisis to help out an old friend.

Liam’s got a kind heart and even though Sally may have hurt his brother Wyatt Spencer (Darin Brooks), he knows deep down she’s a good person.

Sally made a big mistake, but she deserves a second chance. However, her chance at a new start may be ruined thanks to Bill. Annoyed by his dad’s actions regarding Sally, Liam feels it’s his duty to step up to bat for Sally.

With a phone call to Jack and Lauren, Liam will give them Sally’s side of the story. He’ll also explain Bill’s numerous attempts to ruin Sally’s company, including blowing up her building with her and Liam still inside.

Although Liam’s actions will help save Sally’s job, Bill is going to be furious that Liam went behind his back.Bill feels that Liam should be on his side given everything that Sally put Wyatt and Flo through.

While Liam loves his brother Wyatt, he doesn’t share any love for Flo, who took part in the baby switch involving his daughter Beth Spencer (Madeline Valdez).

Bill, Wyatt, and Flo may be anti-Sally, but Liam will throw his support behind the redhead designer.