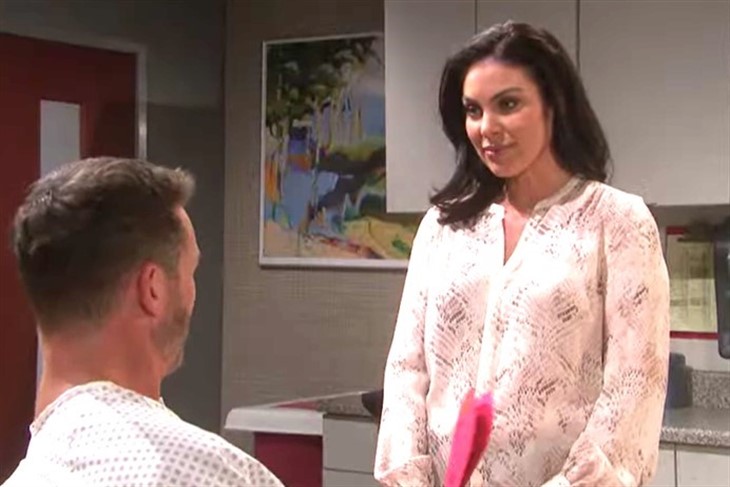 Days of Our Lives spoilers tease that Chloe Lane (Nadia Bjorlin) finds herself feeling pulled towards Brady Black (Eric Martsolf) in upcoming episodes of Days of Our Lives!

Days of Our Lives viewers will recall that Chloe feels responsible for Brady getting shot since she offered a safe harbor for Philip Kiriakis (Jay Kenneth Johnson) when Brady warned her not to. As a result, when Angelo Vitali’s (Angelo Tiffe) hitman came looking for Philip, he missed his mark and shot Brady instead! After much discussion back and forth between the two of them, Chloe finally convinced Brady to let her nurse him as he recovers. That way he doesn’t have to worry about trying to take care of both himself and his daughter Rachel Black (Josephine and Rosalind May).

Brady was extremely hesitant, knowing the jealousy that Kristen DiMera (Stacy Haiduk) displays concerning Brady and Chloe’s friendship. After all, they were once married and Brady still feels a bond of sorts with her, even though he describes it as friendship. Kristen sees it as potentially something else entirely and already went off on him about it when a photo of a New Year’s kiss between the two at a New Year’s Eve party hit the Salem Spectator and Kristen saw it online!

Chloe had even rather inappropriately asked Brady a couple of weeks ago if he thought he could sustain a relationship with Kristen, let alone a marriage, with her in prison for so many years. He had been thinking about proposing and their marrying behind bars so Kristen would feel more secure. But now, as Chloe takes care of Brady, even spoon-feeding him, she is starting to feel more of a pull!

Chloe even brings Brady a Valentine card while he is still in the hospital waiting to be released; it is obvious that Rachel didn’t make the card! Brady looks just a bit confused as he asks Chloe if that means she is asking him to be her Valentine! Brady is committed to Kristen and he has made that clear not only to Kristen, but to Chloe too!

Kristen is so insecure about him having anything at all to do with Chloe that she broke out of prison after hearing the gunshot on the phone, after Chloe dismissing her and telling her she had to call 911 after the shooting, after which Chloe hung up on her! No wonder Kristen was panicked! Days of Our Lives viewers will remember she kidnapped Tony DiMera, (Thaao Penghlis) and grabbed a gun from a prison guard, and went straight to Salem University Hospital where she found Chloe in the hospital room with Brady and held a gun on her while he was still unconscious!

Tony, along with Chad DiMera (Billy Flynn) was able to get Kristen calmed down and back to Statesville Prison and smoothed things over so additional time would not be added to her sentence. Brady certainly doesn’t want anything like that, which he found out about later, happening again!

Chloe, apparently unconcerned with what Kristen may think or do, continues to lay it on strong with her caretaking of Brady, and that raises a red flag that Chloe has more than sisterly love on her mind where he’s concerned! She even tells him that Philip kissed her! Could that be to make him jealous?