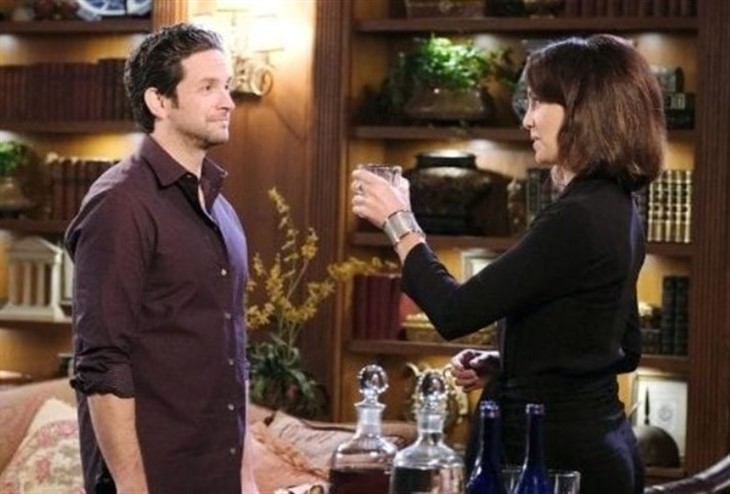 Days of Our Lives (DOOL) spoilers tease that Gwen Rizczech (Emily O’Brien) has finally revealed why she has tried to destroy Abigail DiMera’s (Marci Miller) life and for Jake Dimera (Brandon Barash) it bring up more questions than he will eventually want an explanation for. As viewers know, Gwen came to town with seemingly no ties to Salem except for her on-again/off-again with Jake!

Days Of Our Lives Spoilers – Did Gwen Rizczech Seek Out Jake DiMera?

According to DOOL spoilers, Gwen was first seen in Salem as another patient at Bayview where she befriended Claire Brady (Isabel Durant). But Claire and Gwen haven’t really been in each other’s company since then. It was shortly revealed that Gwen was Jake’s ex-girlfriend and in possession of a book that Jake needed to return to the mob.

Days of Our Lives recaps show Gwen soon decided she wanted Jake back but found Gabi Hernandez (Camilla Banus) to be interested in Jake as well, By this point, Gwen had already drugged Abigail’s champagne which led to Abigail having hallucinations that required treatment out of town. But Gwen hadn’t shown any interest in the DiMera’s at that point, she just seemed to want Jake.

Days Of Our Lives Spoilers: Susan Agrees To Make The Switch With Kristen

DOOL Spoilers – Was Gwen Rizczeck Using Jake DiMera All Along?

Jake will certainly wonder if Gwen had been using him all along in order to get closer to the DiMera’s. But that doesn’t seem likely unless Gwen knew Jake was a DiMera before he did. Her interest in Jake seems to be exactly as it seems to be, that is until Jake found out he was a DiMera. At that point, it was apparently just a big coincidence that Jake was part of the very family that her hated enemy was a part of. She was all too happy to move in to the DiMera mansion, so she could steal Abigail’s husband while Abigail was receiving treatment.

Days Of Our Lives Spoilers – Gwen Rizczeck Wasn’t Using Jake DiMera, At Least Not At First!

But once Jake was settled in at the DiMera Mansion, that’s when Gwen may have continued her relationship to Jake so she would have an in. And when Abigail recovered and came home, Gwen was in the exact right place to continue her vendetta against Abigail and her the rest of the Devereaux family. So Gwen will likely let Jake know that their relationship was real at least in the beginning. Jake will be angry that Gwen used their relationship to move into the mansion where she was close enough to destroy Abigail’s marriage. But at least he can take comfort that in the beginning, she truly loved Jake!

Did Gwen somehow know that Jake would be her ticket into the DiMera mansion? Or was she truly in love with Jake in the beginning? Will Jake believe Gwen after her many lies? Salem is full of coincidences that seem unbelievable so stay tuned to Days of Our Lives, airing weekdays on NBC. And don’t forget tp check back right here regularly for all your Days of Our Lives news, information and spoilers!