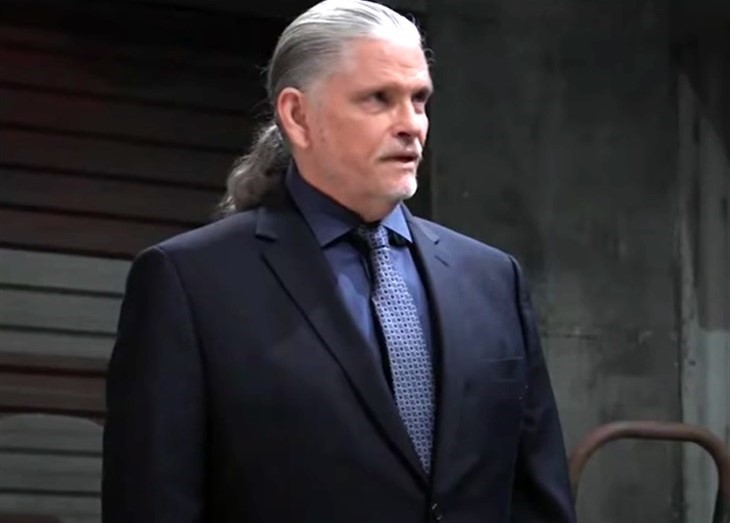 General Hospital (GH) spoilers tease that both Dr. Britt Westbourne (Kelly Thiebaud) and Brando Corbin (Johnny Wactor) have been secretly working against drug lord Cyrus Renault (Jeff Kober). Looking into leaks in his organization he may discover both at the same time. And if there is one thing that Cyrus won’t tolerate, it’s betrayal. Given the opportunity, he would kill both of them without blinking an eye.

General Hospital Spoilers – Brando Corbin realizes The Game Is Up!

Cyrus doesn’t seem to trust Brando all that much anyway. Thanks to his mother, Gladys Corbin (Bonnie Borroughs), Cyrus is well aware of the forged documents that allowed Dev Corbin (Ashton Arbab) to pretend to be an America citizen. Sonny Corinthos (Maurice Bernard) was the one who had the documents forged, but since Brando was listed as Dev’s father, he could like be in trouble too. Other Corinthos family members could also be charged with aiding and abetting the crime. Cyrus has already told Brando that if he steps out of line, he will have his attorney reveal Dev’s true citizenship. But if Cyrus finds out that Brando has been feeding Jason Morgan (Steve Burton) information about Cyrus’s activities, he may decide that Brando needs to be taken out.

Although it may not have been her intention when she took the Chief of Staff position at General Hospital, Britt quickly realized that the increase of drug overdoses in Port Charles since she last lived it is due to Cyrus. Although not wanting to get in between two mob families, Britt realized that the Corinthos family doesn’t deal in drugs. Even though the idea terrified her, Britt risked Cyrus’ wrath by telling Jason about the new, highly addictive drug that Cyrus has formulated at General Hospital.

General Hospital Spoilers – Perhaps Cyrus Renault Will Attempt To Take Out Two Birds With One Stone!

If he does discover Britt and Brando’s treacherous actions at about the same time, perhaps he will lure them to a location where he intends to bomb them, much like he had Julian Jerome (William DeVry) do at the Floating Rib. Brando would likely realize something is off, and may even be able to get himself and Britt to safety in time. But Cyrus won’t just give up, so Britt and Brando may have to go into hiding together!

With Cyrus’ men always close behind, Brando may have to convince Britt that their only hope of survival is to lean on one another as they go on the run! Although it would likely be safer to get out of Port Charles altogether, perhaps the pair will just hide out in various Port Charles locations, such as the Haunted Star. Britt has seemed to have turned over a new leaf, but could she actually become a romantic? Perhaps their time together won’t be a complete nightmare, if a new romance could possibly form from it?

Would you enjoy seeing Britt and Brando go into hiding together, possible even finding romance in the process? Or would you rather Brando continue showing interest in Sasha Gilmore (Sofia Mattsson). And although it seems like Jason and Britt are possibly heading into a romantic relationship, would you rather Britt turn her attentions to Brando instead? Danger can often lead to love in Port Charles, so stay tuned to General Hospital airing weekdays on ABC. And don’t forget to check back right here regularly for all your General Hospital news, information and spoilers!