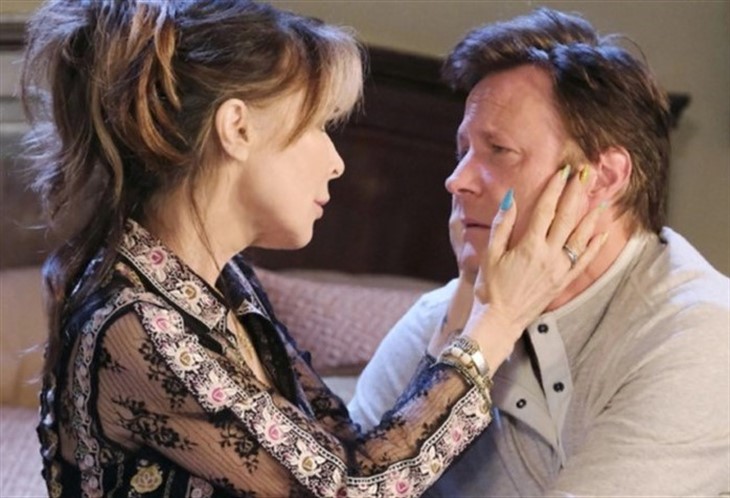 Days of Our Lives (DOOL) spoilers tease that Jack Devereaux (Matthew Ashford) will worry that Jennifer Horton (Cady McClain) has had enough. As if it wasn’t bad enough that Gwen Rizczeck (Emily O’Brien) was revealed as Jack’s heretofore unknown daughter, but a confrontation between Gwen and Laura Horton (Jamie Lyn Bauer), Jennifer’s mother, ended up with Laura dead and Gwen bonding with Jack for support.

Days Of Our Lives Spoilers – Jack Devereaux And Jennifer Horton Have Just Reconciled After Learning About Jack’s Dalliance With Kate Roberts!

Days of Our Lives Spoilers – Jennifer Horton just reconciled with Jack Devereaux after discovering that he slept with Kate Roberts (Lauren Koslow) while Jennifer was in a year-long coma. To be fair, Jack didn’t know if Jennifer would ever wake up and he had spent every day in the hospital until the day she woke up. He made a terrible mistake but Jennifer was able to finally forgive Jack. But just as they were settling back into a happy married life, they learned Gwen’s reason for hating Jack and his family. And now Jennifer’s mother is dead because of Jack new daughter. Jennifer will leave Salem as soon as Laura’s funeral is over.

Days Of Our Lives Spoilers: Abby Attacks Gwen, Will She Try To Get Revenge?

DOOL Spoilers – Jennifer Horton Will Go To Boston To handle Laura Horton’s Affairs, But Will She Return?

Jennifer could easily decide to take some time to deal with the fact that her marriage to Jack has come at such a great cost. And now, her mother is dead. Jennifer will likely decide that her love for Jack trumps everything but it might be quite a while before she’s ready to return to Salem and resume her marriage. But in the meantime, will a frustrated Jack once again turn to Kate?

Days Of Our Lives Spoilers – Will Jack Devereaux Get Lonely While Jennifer Horton Is Away, Could He Turn To Kate Roberts Once Again?

As time goes by, Jack might very well wonder if Jennifer will come back to Salem, and to him. Jack is well aware that he has caused so many problems for Jennifer that maybe she won’t want to come back. And it doesn’t seem likely that Kate’s relationship with Jake DiMera (Brandon Barash) will last for long. But will Jack and Kate make the same mistakes that he made before? Jack might be tempted to sleep with Kate again, but hopefully one of them will stop things before Jack really does ruin the last hope of being with Jennifer.

Have Jack and Kate learned their lesson? Could Jack decide that Jennifer isn’t coming back and try to sleep with Kate once again? Will Jack and Jennifer ever be happy again? True love comes at a cost in Salem, so stay tuned to Days of Our Lives, airing weekdays on NBC. And don’t forget to check back right here regularly for all your Days of Our Lives news, information, and spoilers.