Young And The Restless (Y&R) Spoilers: Amanda Gets A Surprise From Naya 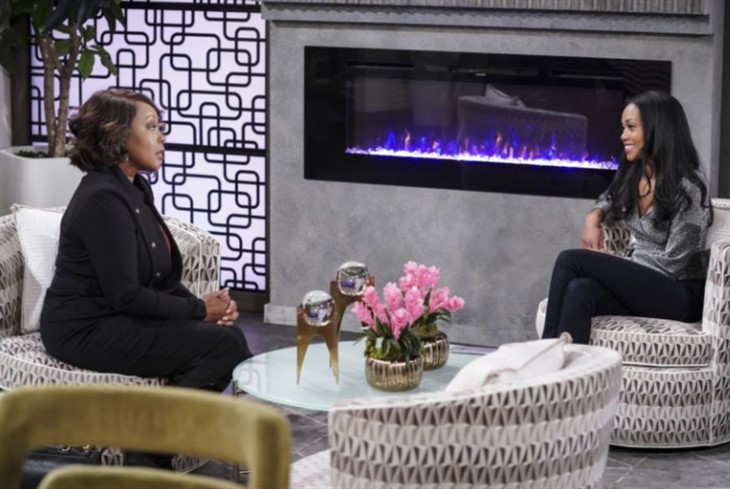 Viewers of The Young and The Restless will remember that Naya’s other daughter, Imani Benedict (Leigh- Ann Rose) took out a restraining order against Amanda when she tried to connect with Naya in previous episodes of The Young and The Restless. Naya herself had finally agreed to meet with Amanda and they had gotten somewhat acquainted, and Amanda was getting some answers as to the circumstances in which Amanda and her twin sister, the late Hilary Hamilton (Mishael Morgan) were separated and why. Naya had been under the control of her parents as a young student and really had no choice in the matter.

The Young And The Restless Comings & Goings: Mystery Woman Arrives On Y&R And Stirs Up Big Drama

Hilary was given to a cousin, Grace Turner (Leslie Stephens) and Amanda went into the foster care system. Grace apparently was unable to care for both babies at the time. Imani was totally against Naya having anything to do with Amanda, because they are a wealthy family and they had been approached before with blackmail schemes and Imani regarded Amanda as a scammer, even though she told her she was an attorney herself – Imani figured she faked her own papers! Plus she couldn’t find any history on her – and that had been the doing of Amanda herself, during the time she had been stalked by Ripley Turner (Christian Keyes). She’d erased herself from the Internet so he couldn’t find her. Amanda was not given the chance to explain that. Amanda had gotten as far with Naya as to tell her what happened to Hilary and the woman looked like she was going to cry and had a lot of regrets when Imani stormed in!

Amanda unexpectedly receives a call from Naya, wanting to meet. Amanda is understandably surprised but at the same time concerned, because of the restraining order that Imani had placed on her. She agrees to meet at Crimson Lights. Amanda hopes Imani isn’t trying to set her up, but then she dismisses the thought, since it is doubtful that Imani would use her own mother to set up Amanda to violate a restraining order! Amanda is certain that Naya wouldn’t be on board with such a thing. Amanda waits at a table for Naya to arrive, and she does. One potential stumbling block out of the way!

The Young And The Restless Spoilers: Kyle And Summer Doomed – Reunites With Baby-Mama Tara?https://t.co/Yf45K5a5nj

Amanda, however, is very concerned about that restraining order and asks Naya if she knows anything about it. Naya frowns and tells Amanda that Imani went behind her back and she’s not pleased, although she understands her skepticism of Amanda and her intent. Naya had told Imani the whole story right in front of Amanda the last time they met in Amanda’s hotel suite, and Imani understandably had been upset, that being the first time she was ever told such a thing. Mother and older daughter have a somewhat uncomfortable conversation from that point, trying to communicate as though walking on eggshells.

Naya tells Amanda she does want to get to know her, but with Imani’s having taken out that restraining order, perhaps it would be better if they have their meetings in secret. Amanda tells her she isn’t so sure she can do that, given the restraining order. It could cause problems for her! Besides, Amanda tells Naya, she doesn’t want to do things in secret-keeping Imani out of the loop even if it does hinder they’re getting to know one another, it could put a rift between Naya and Imani!