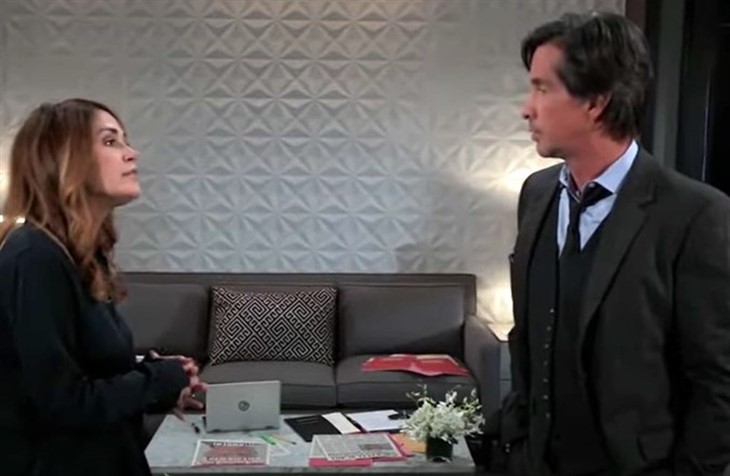 General Hospital spoilers tease that Jackie Templeton (Kim Delaney) will plead with Dr. Hamilton Finn (Michael Easton) not to tell Harrison Chase (Josh Swickard) the results of the paternity test he did in an upcoming episode of General Hospital!

General Hospital viewers will remember that when Finn questioned Jackie about Chase’s paternity, she wouldn’t tell him. She told him the same story she had told for years, that Chase was Gregory Chase’s (Gregory Harrison) and Chase’s birth didn’t line up with the timeline of when she and Finn had a one night stand the night before her and his father’s wedding! However, she looked very uncomfortable when Finn brought up the idea of having a paternity test done, and put forth a hypothesis, saying if Finn was his father, why would he want to destroy Chase’s life and memories of Gregory being his father and Finn being his big brother?

Finn, with a bit of the detective in him, picked up on that discomfort right away, feeling that Jackie was being much too defensive for Chase not to be his! So, Finn took advantage of running into his little brother – or is that his grown son – at Volonino’s Gym, where he found him hot, dirty, sweaty, and drinking a lot of water! They had a talk, and as soon as Chase left and Finn found the coast was clear, he grabbed the empty water bottle that Chase had just thrown away in the garbage can and got it to General Hospital where he could access some lab equipment and supplies. Finn wanted to make sure to check it against his while it was fresh!

GH Spoilers – The Test Is Back And The Jig Is Up

The test is back and the jig is up – and Finn calls Jackie for a meeting. He has the test and guess what – he used a very sophisticated DNA test that can distinguish between a father’s and a brother’s DNA to determine paternity in a baby! This is not the first time in history that sons have slept with stepmothers or stepfathers with stepdaughters, for that matter! Technically, Jackie was not yet married to Gregory when she and Finn had their one night stand, but she was the next night and has been Finn’s stepmother for as many years as Chase is old!

General Hospital Spoilers – Will Jackie Give Romance With Robert Another Shot? And Could Holly Once Again Break Them Up? https://t.co/5EYyzEXEOJ

Jackie is dreading this confrontation but she knows she cannot dodge Finn forever because she figures that somehow Finn got DNA from Chase and went through with the paternity test on his own. As expected, Finn tells her the paternity test came back as him being Chase’s father, and Jackie, not realizing that there are specialized testing procedures and tests that can tell the difference between a father and son, scoffs. She says of course there will be a relationship shown because Gregory and Finn are father and son! Finn explains the test and the procedure that he used and that it is one-hundred percent certain that Chase is his son, not his brother. However, he does promise Jackie that he will not tell Chase or Gregory – at least for the time being!