‘The Young And The Restless’ Spoilers: Amanda Stunned By Devon – Hits The Breaks On Romance? 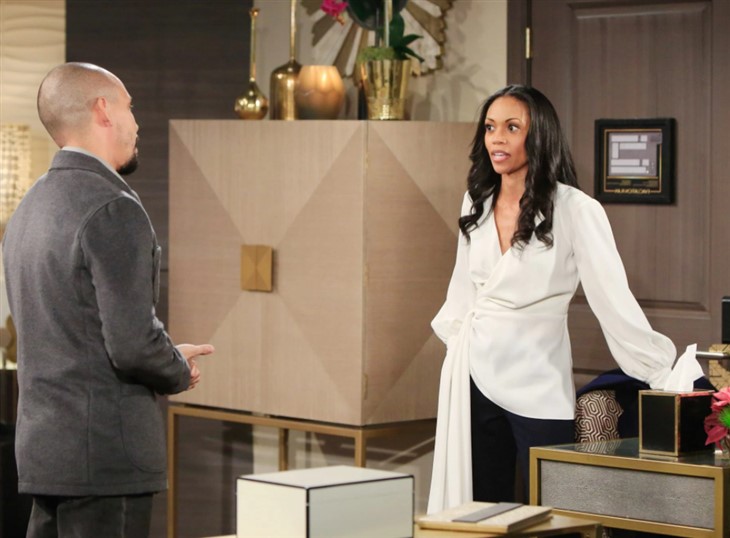 The Young and the Restless spoilers document that Amanda Sinclair (Mishael Morgan) will be stunned to learn that Devon Hamilton (Bryton James) and Elena Dawson (Elena Dawson) recently reconnected. While that confirmation of still existing feelings wasn’t planned, it clearly threatens the legitimacy of the Demanda pairing that appeared to be happening.

Hevon was one of Y&R’s great couples of the 2010s. But Morgan’s exit from the cast created the possibility that she and James wouldn’t be able to work on-screen again. But soaps have long been known to be inventive and Amanda’s existence in the world became known.

The Young And The Restless Spoilers – Demanda Better Than Hevon?

It’s always hard, if not impossible, to compare an original to what comes after it. Add in the memorable work that Morgan and James combined to create and the suggestion that a reimagined coupling, Amanda and Devon, would be as good is questionable.

Of course, the new duo would actually have to happen and then exist in some form for the approximate same period of time that Hevon did. So, it seemed as though Y&R was building toward this comparative start, and then Elena came to Devon’s penthouse door on that icy night.

Elena likes Nate Hastings (Sean Dominic), but she clearly does not love him. Possibly that feeling can grow? But viewers are wondering, along with Nate, if that’s realistic.

The depth of Elena’s feelings represents just how much she loved Devon. Rather than starting to subside, it appears as though Elena has entered a period where she will make a renewed push to restore the relationship she had with Devon.

Amanda asked Devon directly about Elena. He didn’t deflect her question, or what it implied.

Devon said that the past was over. That particular answer, offered to a woman he was surely wanting to start a romantic relationship, was meant to assure Amanda.

Fans know that Amanda will learn about Elena’s reemergence in Devon’s life. Morgan’s second character will defer to her legal training, partially as a way to protect her own sense of self, when citing the crucial information Devon withheld.

Devon’s acknowledgment will confirm his duplicity. And with that, the reimagined Hevon might be done.