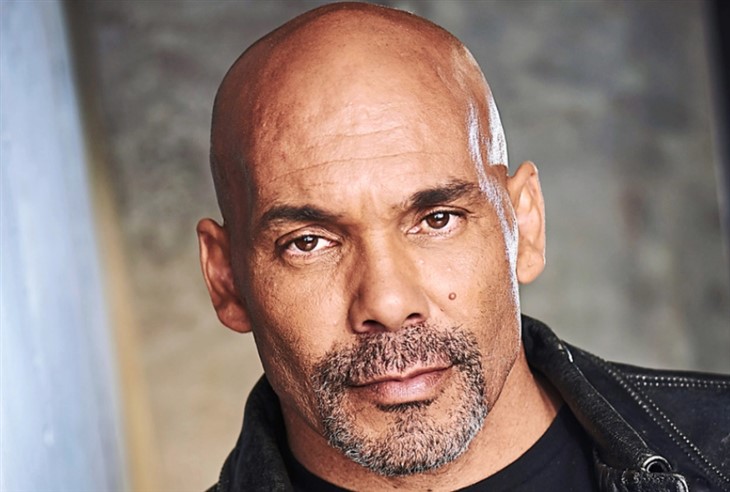 General Hospital spoilers tease that there is an upcoming huge storyline for Marcus Taggert, that his portrayer at General Hospital, Réal Andrews describes as “it’s about to get real!”

Réal is back filming at General Hospital after a short time when Asante Jones took over for him. Rumors abounded that Réal was ill, because of his past battles with cancer, but he assured fans he was just fine. He hadn’t gotten back from a vacation in time and Covid travel restrictions had kept him from returning to Hollywood. He said specifically that there are some major storylines coming “down the Pipe” for Taggert!

General Hospital viewers will remember that onscreen, Taggert is currently in police custody in a cell at the Port Charles Police Department, and trying to make amends with his daughter Trina Robinson (Sydney Mikayla) and his ex-wife Portia Robinson (Brook Kerr) after having faked his death, with the help of Port Charles Police Commissioner Jordan Ashford (Briana Nicole Henry). He did that in an effort to help expose and take down drug lord masquerading as a philanthropist, Cyrus Renault (Jeff Kober). Réal had not aired on General Hospital as Taggert since December 2020. He assured his viewers that his health was fine, and his one year checkup after having prostate cancer surgery in 2019 came out just fine. He says he’s happy and in the best shape of his life! While Asante Jones took over, he played out Taggert’s arrest for staging his death (and various other “crimes”) and a tense reunion with Portia and Trina.

Taggert has been on General Hospital on and off for a long time, Andrews having originated the part in December of 1996. He stayed a year, then Matthew St. Patrick took his place, with Andrews resuming the role in 1998 and staying on until May 2003. Longtime General Hospital viewers will remember that Taggert, as a young kid in Bensonhurst, New York was mentored by Deke Woods (uncast character) who was Sonny Corinthos’ (Maurice Benard) abusive stepfather. Deke, however, was known as a hero on the police force and to young Marcus, who looked up to the cop.

However, he never saw the side of Deke that Sonny and his mother Adela Corinthos (Iris Almario) did. Deke beat both Adela and young Sonny frequently, often locking Sonny in a dark closet, which is where his famous claustrophobia started. Marcus grew up to be Deke’s partner on the police force as a rookie, and when Sonny was about sixteen years old and had started working for Joe Scully (Robert Miano). Scully took Sonny in after he told him about Deke’s ruthless beatings, but Adela was beaten even worse after Sonny left home!

Scully told Sonny to be out in public one night and Scully and a henchman cornered Deke in an alley and shot him dead! After his body was found, Taggert blamed Sonny for Deke’s death and came to Port Charles with a vendetta against Sonny. After many years, part of which viewers learned was spent in the DEA and a former partner of Port Charles Police Commissioner Jordan Ashford (Briana Nicole Henry) in a task force that took Cyrus down by manufacturing evidence against him, he returned to Port Charles to help take Cyrus down again, and made peace with Sonny because of their common enemy, Cyrus!