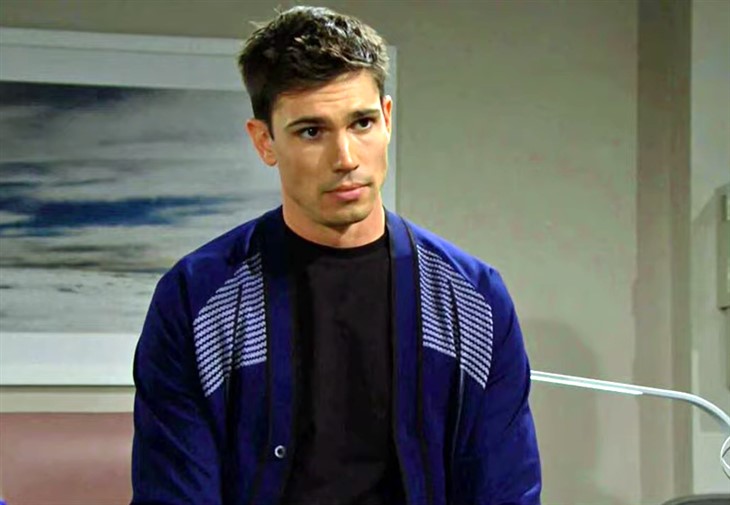 The Bold and the Beautiful spoilers document that John Finnegan (Tanner Novlan) pledged to stand by Steffy Forrester (Jacqueline MacInnes Wood) even if he wasn’t identified as the father of her baby. Well, that pledge is about to be tested.

Buzz indicates that Liam Spencer (Scott Clifton) will be revealed as the father. The news will shake all involved, as everyone was hoping that Finn would be the dad.

However, teasers also indicate that something nefarious happened and that Liam actually tested negative, meaning that someone altered the results so that Finn wouldn’t prove out as the father.

Steffy’s second major motorcycle accident caused her to be seriously injured. The incident, where Bill Spencer (Don Diamont) and his sports utility vehicle were involved in the accident, resulted in a rush to the hospital. Immediate surgery followed.

A cool scene was created that allowed Novlan to be introduced to the audience in a memorable fashion. Finn was assigned to Steffy’s case, with her waking up one day to see him standing at the foot of her bed. A magical glow appeared around Finn, with audience members recognizing that a love match was made at that moment.

Steffy continues to fall deeper in love with Finn. She can’t get over how maturely he’s handled the reveal about her and Liam, or that Finn has continued to reinforce that their future plans won’t be altered even if he’s not the father of her child.

So, with Liam believing he has that status, Finn’s mental toughness will be tested next. It certainly wasn’t easy for him to tell Steffy that his love for her went beyond a one-time incident with Liam. But he meant it.

As viewers recall, Finn has taken Steffy’s side. He believes that Liam played off Steffy’s vulnerabilities. The inclusion of alcohol in that scenario also made what happened generally understandable, while also being regrettable.

The Bold And The Beautiful (B https://t.co/AgjJRvO5Zb #BB #BoldandtheBeautiful #CBS

The Bold And The Beautiful Spoilers – After The Next Reveal Happens

If teasers prove out as correct it would follow that Finn will be revealed as the real father of Steffy’s baby in the future. Steffy is expected to give birth later in the summer. So, B&B could be planning for Finn’s identification before or after the delivery date.

Whether the reveal plays out before or after Steffy delivers, Finn will benefit from the seeming miracle. As long as he stands by Steffy and remains patient with the circumstances that first include Liam, then Finn will look even better to Steffy somewhere down the storyline.