The Bold And The Beautiful Spoilers: Zoe Goes Back To Stalker Side As She Becomes Obsessed With Zende 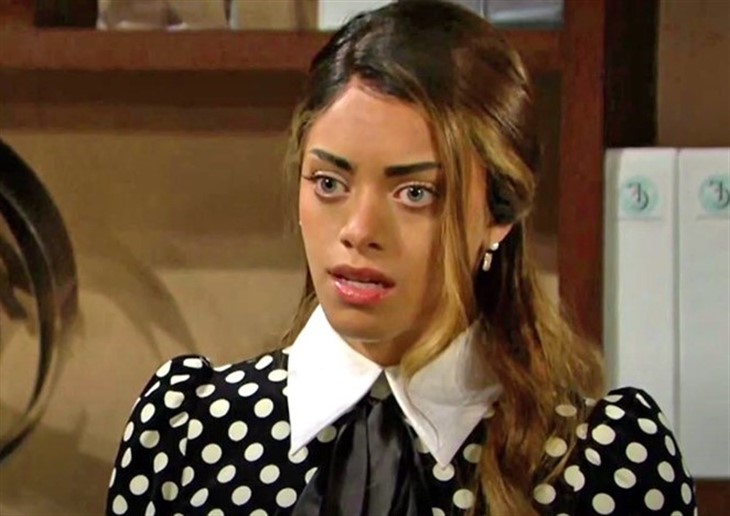 The Bold and the Beautiful spoilers indicate that Zoe Buckingham (Kiara Barnes) will go back to her bad girl side.

It’s well-known that Zoe has a romantic interest in Zende Dominguez (Delon de Metz). Even though she was engaged to Carter Walton (Lawrence Saint-Victor), Zoe couldn’t deny there was a connection between her and Zende.

After Carter’s friend Ridge Forrester (Thorsten Kaye) told him about Zoe’s betrayal, he confronted his fiancée.

Zoe tried to convince Carter she loved him, but he didn’t believe her.

Now with her single again, she’s free to go after Zende and may resort to her old way to get him.

The Bold And The Beautiful Spoilers – Zoe Buckinham’s Stalking Past

When Zoe first arrived in town, she was stalking her ex-boyfriend Xander Avant (Adain Bradley).

Zoe became jealous of Xander’s relationship with Emma Barber (Nia Sioux), and tried to break up the couple.

Although Xander told her he was happy with Emma, Zoe never relented in the pursuit of her ex.

Eventually, with time Zoe changed and became a good person.

Yet, fans are wondering if she’ll be going back to her devious side.

B&B Spoilers – Are Zende Forrester And Paris Buckingham In Danger?

Zoe isn’t the only one who’s taken a liking to Zende. Her sister Paris Buckingham (Diamond White) also has a romantic interest in fashion designer.

Zoe is jealous of Paris’ closeness with Zende, and with Paris a threat, Zoe will try to get her sister out of Zende’s life.

As seen in the past, when Zoe wants something or someone, she’ll stop at nothing to get it.

Zoe’s going to grow obsessed with Zende, and just like she did with Xander, she’s going to be stalking the young fashion designer.

Zende can try to ignore Zoe all he wants, but she’s not going to take no for an answer. She’ll attempt to seduce Zende and convince him they’ll be perfect together.

Paris isn’t going to be happy when her sister starts interfering in her relationship with Zende.

The Bold And The Beautiful (B&B) Spoilers: Hope Logan Miserable With Cheating Liam, Standing By Him For The Kidshttps://t.co/6SYJoNksVG

Although Zoe and Paris are sisters, they don’t have a that close bond that most siblings do.

Their sibling rivalry is going to kick up a notch when they fight for Zende’s affections.

Paris isn’t going to back down just because Zoe decided she’s now in love with Zende. She’s making it clear Zende is her man and Zoe should back off.

But Zoe isn’t going down without a fight.

She’s going to amp up her plot to win Zende, even if it means resorting to devious actions.

Zoe knows that with Paris out of the picture, she stands a greater chance of being with Zende.

Zoe already tried to get Paris out of her life by getting her sister to quit Forrester Creations, but the younger Buckingham sister refused.

Now with Zende at stake, there’s no telling how far Zoe will go to be with him.

Her actions could not only cost her sister, but also Zende if he discovers what kind of person Zoe really is.