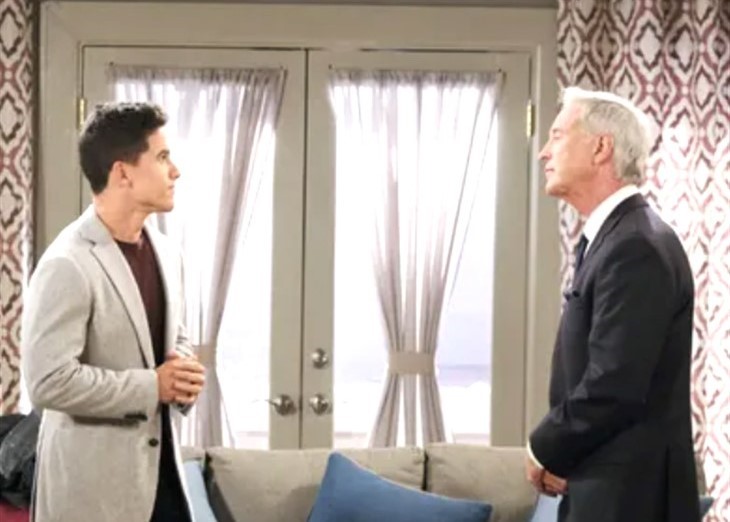 Days of Our Lives spoilers for the week of February 22 reveal that John Black (Drake Hogestyn) threatens Charlie Dale (Mike Manning). Then, John oddly disappears and even though he returns, Marlena Evans (Deidre Hall) is suspicious and worries about what her husband may have done. Does he murder his granddaughter’s rapist?

Days Of Our Lives Spoilers – Released From Police Custody

DOOL spoilers reveal that Claire Brady (Isabel Durant) was stunned to run into her ex. She couldn’t understand why Charlie would be released. Even though he is guilty, he is still trying to convince Claire to believe his side of the story. As word gets around Salem that Charlie is out of police custody, things will get volatile. We have already seen him threatened by Lucas Horton (Bryan Dattilo). But he won’t be the only one that wants Charlie dead.

The TV Guide listings state that John will confront Charlie. Things get intense and John ends up threatening Charlie’s life. Of course, Charlie is still trying to convince Claire to give him another chance and to believe he’s innocent of rape. So, he could play the innocent act with John or he might switch gears and give John a completely unexpected response.

Days of Our Lives spoilers reveal that after Charlie is threatened, John ends up disappearing. He comes back a bit later and then a body is found. It is confirmed who ends up getting killed, but it seems pretty clear it’s Charlie. Marlena is really unnerved by the timing of her husband’s disappearance. She questions John about where he was and what he was doing. She is connecting the dots and wonders if her husband might have done something to Charlie.

Days Of Our Lives Spoilers – Who Commits Murder?

There is a long list of suspects that might be responsible for Charlie’s death. Even though John looks suspicious and Lucas threatened Charlie, they are likely innocent. Head writer Ron Carlivati previously told Soap Opera Digest that it won’t be that easy to guess who committed murder, especially in the beginning. So that tells us John is innocent. So, who ends up killing the rapist?

We know that Allie Horton (Lindsay Arnold) confesses to the crime, which shocks Claire. However, we don’t think Allie actually kills her attacker. She probably thinks that John did it and is trying to protect him. Another possibility is that Claire is so shocked by the confession because she might be the real killer. Who do you think really murders Charlie? Is it John, Lucas, Allie, Claire, or do you have someone else in mind as the murderer? We will have to keep watching the NBC soap opera to see how this whodunit ends.