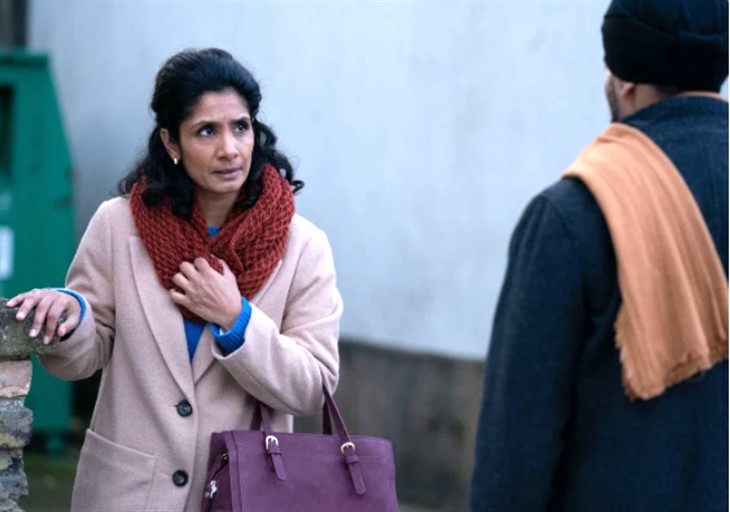 Eastenders spoilers for the week of February 22 reveal that Kheerat Panesar’s (Jaz Deol) mistake will make him his mother’s next target. Kat Slater (Jessie Wallace) is humiliated by the Mitchell family. Ruby Allen (Louisa Lytton) panics as her 12-week scan comes up. Will Martin Fowler (James Bye) find out the truth or could she pull off a way to continue her deception?

Eastenders spoilers reveal that Kheerat tries to poach a customer from the Mitchells. However, the conversation is overheard and the information gets back to Kat. She ends up ratting him out to Phil Mitchell (Steve McFadden). But Phil might not be Kheerat’s biggest problem. His evil mother, Suki Panesar (Balvinder Sopal) finds out and there could be brutal consequences. Fans remember how Suki handled her other son, Jags Panesar (Amar Adatia). Now he’s sitting in prison while his girlfriend is pregnant. Suki doesn’t take kindly to betrayal or mistakes from her children. So, what will she do to Kheerat?

EastEnders News: Danny Dyer Is Loving Being A Grandpa

Eastenders spoilers reveal that Kat starts to develop feelings for Phil, which leads to her getting jealous of Sharon Watts (Letitia Dean). Meanwhile, Sharon thinks her former marriage is being rekindled. Phil ends up devastating Sharon, which makes his side piece happy. However, things take a downward turn when Kat realizes that Phil intends on keeping her a secret. Then, Ben Mitchell (Max Bowden) makes a snide comment about Kat and Phil makes no effort to defend her. She ends up feeling humiliated.

As Ruby’s 12-week baby scan is coming up, she goes into a panic over the truth coming out. It is teased that she could continue deceiving Martin. What does she plan to do about the baby scan and what kind of trickery is involved? It seems she is digging an even bigger hole for herself.

Kim Fox (Tameka Empson) is excited about her new matchmaking business, “The Fox Catcher.” She sets up Isaac Baptiste (Stevie Basaula) and Lola Pearce (Danielle Harold). However, the date ends up a disaster when Isaac thinks that Lola was paid to spend time with him. Even though the situation later gets worked out, Isaac and Lola have another obstacle as their romance is sabotaged.

EastEnders News: Danny Dyer Is Loving Being A Grandpa https://t.co/M6aC48NupE

Also, Peter Beale (Dayle Hudson) will continue going after Ash Panesar (Gurlaine Kaur Garcha) despite his last disastrous attempt to impress her. She’s already gotten in trouble and work. She’s been suspended at work due to Peter’s wild love declaration. So does he even really have a chance anymore? He’s not ready to give up yet. Meanwhile, Dotty Cotton (Millie Zero) has a business proposition for Ruby and it centers around Tiffany Butcher-Baker (Maisie Smith). Also, Isaac is ready to reveal his secret.