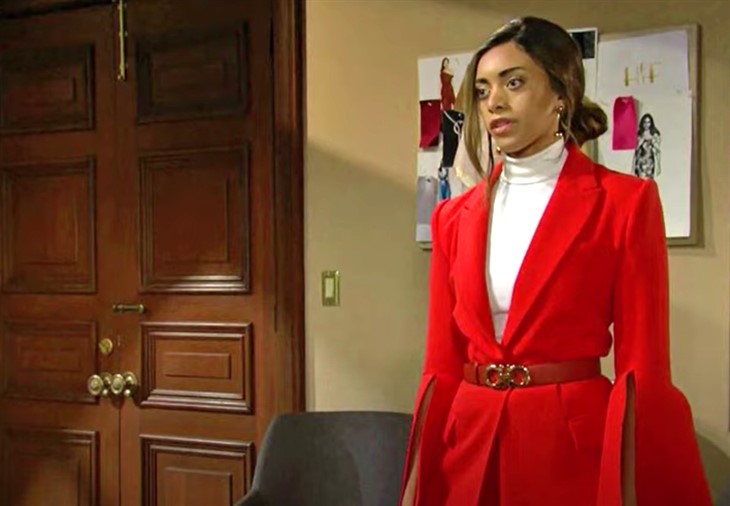 The Bold and the Beautiful spoilers document that Zoe Buckingham (Kiara Barnes) realizes that she didn’t actually have two options. Now, she’s facing the loss of her fiance and an inability to be with the man she thought she may have loved more.

Zende Forrester Dominguez (Delon de Metz) was willing to take a leap of faith a few months ago. But he changed his mind when Zoe appeared to be fully committed to Carter Walton (Lawrence Saint-Victor).

The Bold And The Beautiful Spoilers – Preferred Choice Resists Offer

Carter is right, she should have come to him and said that she wasn’t sure about their engagement. Yes, he would have been hurt. But Carter wouldn’t have been betrayed.

Saint-Victor’s character comes across as a lonely soul. He revealed his unlucky in love backstory to Zoe when they first became involved. That knowledge seems to have created an assumption in her mind. She was the only woman he could get, or she was the best choice available. Neither scenario was true.

There can be no doubt that Zoe took Carter’s love for granted. She also assumed that he wouldn’t become aware of her infatuation with Zende.

B&B Spoilers – Is A Spark Really There?

A word used in the last sentence of the last section, infatuation, is appropriate. Zoe’s feelings about Zende aren’t a theory but do represent what feels like a high school crush.

B&B fans also know that Zoe’s backstory includes her obsessive approach to Xander Avant (Adain Bradley) and a misguided engagement to Thomas Forrester (Matthew Atkinson). The first connection was about the love that stopped, started again, and then ended with Zoe being dropped. As for Thomas, she liked his social status and surely was rebounding into a situation that was destined to fail.

However and regardless of her past, Zoe and Zende haven’t actually pursued anything. So he might be her next great love, or prove to be nothing more than a crush that fades when an actual relationship is realized.

It’s possible that Carter will digest all that’s happened and give Zoe a second chance. But a quick marriage likely won’t be in order if that happens.

Carter will need time, even if a revival decision is made, to see who Zoe proves to be. But he could also follow through on his offer to Zende and allow a frayed friend to be with her if that’s what de Metz’s character wants.