Days Of Our Lives Spoilers: Kristen DiMera Struggles To Keep Chloe Lane Away From Her Man! 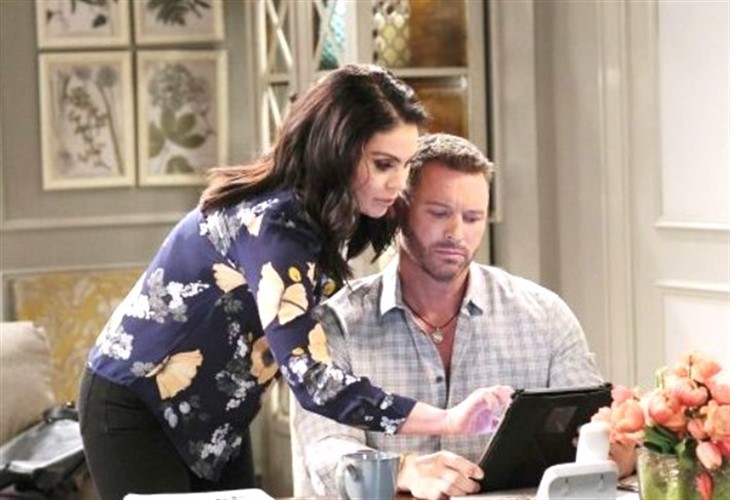 Days of Our Lives spoilers tease that Kristen DiMera (Stacy Haiduk) will struggle while trying to keep Chloe Lane (Nadia Bjorlin) away from her man in upcoming episodes of Days of Our Lives!

Days of Our Lives viewers will remember that Kristen had asked Susan Banks (Stacy Haiduk) to switch places with her in a recent episode. Susan was rather hesitant, especially since Kristen is in prison! Kristen wanted to switch places with Susan so that she could keep an eye on her boyfriend, Brady Black (Eric Martsolf) and more importantly, to keep Chloe Lane (Nadia Bjorlin) away from him. Kristen’s insecurities are behind her jealousy and worries that Chloe, an ex-wife of Brady’s, will take advantage of her situation to get Brady back.

When Susan saw that Chloe indeed is hanging around Brady a lot – she could totally understand why Kristen was nervous, and finally agreed to switch places with her. Even though Susan wasn’t totally trusting Kristen, she does know that she has a little baby girl with Brady, and she doesn’t want Rachel Black’s (Josephine and Rosalind May) parents to not be together when Kristen gets out of prison. Susan goes to Statesville Prison, and she and Kristen talk about the switch – but there’s a slight snag when someone else overhears the conversation – Vivian Alamain (Linda Dano)!

Vivian has someone she wants to be protected from someone too – she wants Kate Roberts (Lauren Koslow) away from her son, Jake DiMera (Brandon Barash)! She threatens to rat Kristen and Susan out if Kristen doesn’t help her! So Kristen agrees to help Vivian with Kate in exchange for Vivian keeping an eye on Susan and helping her to be as Kristen-like as possible while she’s out of prison and in Salem!

That is why her father Stefano DiMera (Joseph Mascolo) made Susan into Kristen’s doppelganger! While Kristen has Susan’s persona, her voice, and everything else down pat, that is not where Kristen’s struggle lies. Kristen’s struggle is in remaining “undercover” – remaining Susan when Kristen really wants to open her mouth and have Kristen come out instead of Susan! When “Susan” sees that Chloe is feeding Brady with a spoon, helping him dress, and cleaning his wound, and changing his bandages, all of which Brady is quite able to do himself, she can barely restrain herself!

She’s sure if Brady realized she was herself, Kristen, and not Susan, all this would stop and she hopes that Brady would send Chloe on her merry way – far, far, away! She struggles to maintain her cover as she addresses them, in Susan’s persona exclaiming, “Ohhhh! What do you think that bad, bad, bad, bad Kristen DiMera would think about this?!” Kristen knows what she thinks about this and she struggles to stay Susan as she tries to discourage Chloe from taking this kind of care of Brady!