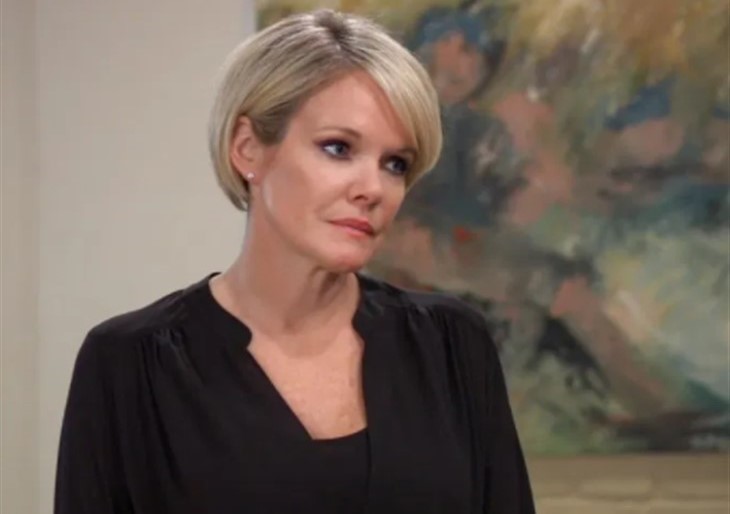 General Hospital spoilers tease that there could be two possible suspects that left the appetite spoiling Valentine’s Day gift for Ava Cassadine (Maura West) in a recent episode of General Hospital, as well as a cryptic note! That’s two more besides Ryan Chamberlain (Jon Lindstrom), unless he’s changed his MO. He usually kills people, not cockroaches!

General Hospital viewers will recall that Ava and Nikolas were at the new PC Grille when the sick gift arrived – along with a cryptic note. The note read, “Secrets and cockroaches, those are the only two things that always survive, except for us!” That note could have definitely been perceived as a threat to Ava’s loved ones although it didn’t seem to indicate a threat to Ava herself.

Whoever it was that left the sick gift and the note, it had to be a stalker; no one knew that Ava and Nikolas were going to dine at the new restaurant, and the gift had been there when the manager came into work that morning, along with the note! That means whoever left it also must know that the couple lives in Wyndemere Castle and where it is and must have been watching from somewhere near where the launch that goes back and forth from the castle. Perhaps the stalker knows of the tunnels and secret compartments and rooms in the castle and could even be hiding in one of them and overheard a conversation Ava and Nikolas had of their plans!

There is also a possibility that the stalker overheard part of a telephone conversation Ava could have had with Nikolas while she was at work in her gallery! The point being, whoever left the creepy gift and the note is targeting Ava and knew they would be at the restaurant when they left them!

GH Spoilers – Could It Be Franco Baldwin Gone Dark?

General Hospital viewers may wonder if the stalker could be Franco Baldwin (Roger Howarth) gone dark. While Franco and Elizabeth Baldwin (Rebecca Herbst) did choose the same restaurant for their Valentine’s Day and second anniversary dinner and Liz did briefly talk to Ava and Nik when they arrived, Franco had become ill and had gone to the mens’ room. Franco has never been known to be a Damian Spinelli (Bradford Anderson) style hacker, so it’s doubtful he could have overheard any phone conversations remotely! He would have had to either been in Wyndemere – which he is not familiar with – or hiding in Ava’s gallery, which he is familiar with. However, there is no indication that he knew they were arriving when he was in the mens’ room, he went before they arrived! Plus, when Franco was dark, he didn’t write cryptic notes and send unusual gifts – he tagged with spray paint. Again, as in Ryan Chamberlain’s case, it could be that a new dark Franco may have changed his MO (Modus Operandi, police talk for methods of committing crimes) but there still isn’t any evidence that he could have known ahead of time that Nikolas and Ava would be dining there that night!

General Hospital Spoilers – Could Spencer Cassadine Be In Town?

Spencer Cassadine (Nicolas J. Bechtel) didn’t like the idea of his father being involved with Ava from the start, and the last time they visited him in France at his boarding school, he was angry at both of them! Ava tried to make amends with him for not helping him get his inheritance back from Valentin Cassadine (James Patrick Stuart) but he was having none of it, and was very angry at Nikolas for making him grieve his death for five years for nothing!

Nikolas and Spencer have been having some phone calls offscreen that have been mentioned over the last several months, and one of them had Nikolas mentioning a plan, although it never played out onscreen. Spencer does have some hacking skills, as witnessed when he threw the mayoral election when Ned Quartermaine (Wally Kurth) as the incumbent was running against his grandmother, Laura Collins (Genie Francis) a few years ago. Spencer might just still be upset enough about Ava and his father getting together to leave such a nasty gift and come up with a cryptic note like that. Although it does seem threatening to Ava’s loved ones, he could have written it that way to draw any suspicions away from himself!

Spencer knows Wyndemere Castle in and out and the tunnels as well, and it wouldn’t be the first time he got a flight out to Port Charles without his grandmother knowing it! It would seem that the most likely suspect, other than if Ryan Chamberlain changed his tactics, would be Spencer! The one thing that might rule Ryan out is that he may not be familiar enough with Wyndemere to know about the secret rooms, although he may know about the tunnels and catacombs under Port Charles – he’d still have to come across the water on the launch to get there or use his own boat, however!