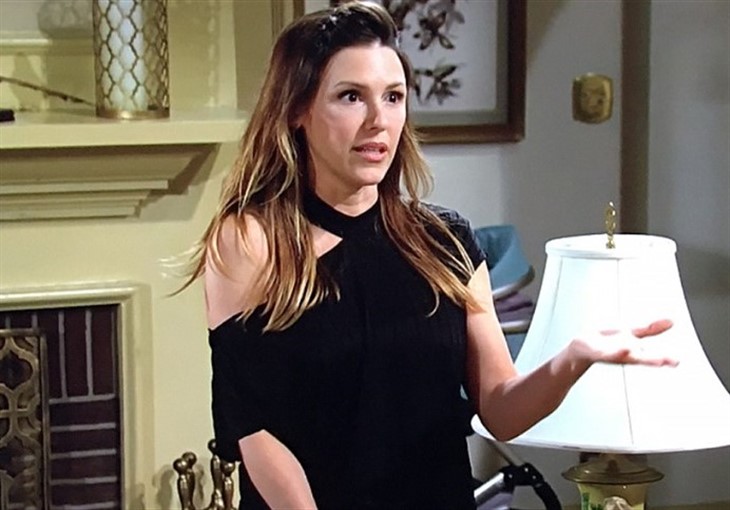 The Young and the Restless (Y&R) spoilers reveal that in Genoa City, Wisconsin Chelsea Lawson (Melissa Claire Egan) might not be able to speak. However, she will unleash her wrath in other ways, the actress says. In addition to that, Chloe Mitchell (Elizabeth Hendrickson) will be clued in about what’s going on between Adam Newman (Mark Grossman) and Sharon Rosales (Sharon Case).

The Young And The Restless Spoilers – Chelsea Lawson’s Fury

Y&R spoilers reveal that after Chelsea had her stroke, Adam insisted on bringing her home instead of keeping her in the hospital. For weeks, we have watched as Chelsea’s anger grows. Unable to speak and initially unable to move, we are seeing some progress. Recently, she was able to wiggle her fingers. It is clear that her fury is driving her motivation to get better. That’s because she has a plan for Adam and Sharon, per Soap Opera Digest.

The Young And The Restless Spoilers: Chelsea Is Planning A Major Surprise For Unsuspecting Adam And Sharon

Chloe goes to visit her friend and at first misunderstands Chelsea’s rapid blinking, tears, and frantic movement of her hand. She starts to race to get Adam but Chelsea is able to get her friend to stop. Knowing Chelsea so well, Chloe realizes that there is more to the story and there is a reason why she doesn’t want Adam alerted of her progress. She ends up asking her friend if she can type. Handing Chelsea her phone, she spells out Adam and Sharon.

The Young And The Restless Spoilers – Unleashes Wrath In ‘Other Ways’

The Young and the Restless spoilers reveal that Egan spoke to Soap Opera Digest about the storyline. She explained that even though Chelsea can’t talk and her movements are still extremely limited, she will find other ways to unleash her wrath. The actress teased that Chelsea has a plan to make Adam and Sharon pay for their betrayal and deception, especially after she sees the picture of the two kissings.

Egan also told the publication that Chelsea is not the same person that she once was. This echoes what the actress said a few weeks ago, indicating that she could revert back to her bad-girl ways.

“All of Chelsea’s worst fears are coming true and she ain’t happy about it… A fire has ignited inside her and she’s not the same person anymore. She has a plan for Adam and Sharon, and since Chelsea can’t unleash her wrath with her voice, she’ll release it in other ways.”

What do you think is going to happen next with this storyline? How will Chelsea unleash her wrath “in other ways?” We will have to keep watching the CBS soap opera to see how this storyline develops over the next few weeks.