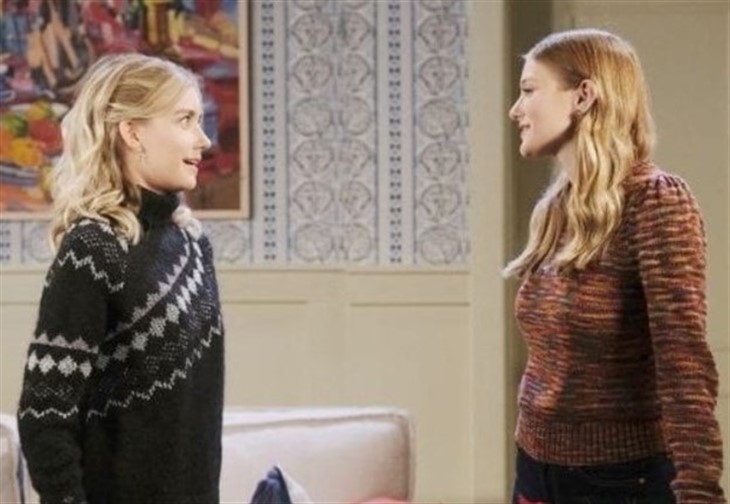 Days of Our Lives (DOOL) spoilers tease that in SalemClaire Brady (Isabel Durant) will be alarmed by Allie Horton’s (Lindsay Arnold) confessions about his monstrous behavior the night of her rape. Claire knew she remembered, but Allie will tell her the details in an upcoming episode of Days of Our Lives!

Days of Our Lives viewers will remember that Allie remembered everything from the night of her rape when her grandma, Dr. Marlena Evans (Deidre Hall) hypnotized her. She had been triggered when Charlie Dale (Mike C. Manning) told her “arrivederci” one day when she had been talking to him and his at that time girlfriend, her cousin Claire Brady (Isabel Durant). But while she had flashbacks, and bits and pieces of memories that caused her to doubt that it was really Tripp Dalton (Lucas Adams) who had raped her, she didn’t have clear enough memories to conclusively say that it was Charlie.

Hence, the reason for her request to be hypnotized. It wasn’t easy by any means for all the events of that traumatic night to come to the surface, but it was cathartic, and now she has details of the rape that she can provide in court if they are needed. But she has never told Claire the details, and now they get together so they can talk it over and Claire will truly see what kind of monster she has been saved from – a real Dr. Jekyll-Mr. Hyde! The only problem is, it is not due to any kind of mental illness that could inspire any compassion for him at all, it is simply the way that Charlie is! Claire will be sure to not feel sorry for him once she hears Allie’s clear memories of the night of the rape!

Days of Our Lives viewers will remember that Charlie had followed Tripp around London because he was told to keep an eye on him by their mother, Ava Vitali (Tamara Braun). However, it was Charlie’s own idea to follow Tripp, and Allie, from the nightclub that night to Allie’s apartment, where he waited until Tripp left and then he knocked on her door. Allie was so drunk she hardly knew what was going on, and Tripp had simply helped her into her bed and left a note of how to contact him if she needed him.

Allie thought Tripp forgot something and answered the door and there was Charlie – he barged his way in and pushed her down on the bed and held her down, and made sure that no one could hear her screams! Based on the way he treated his own mother when he knocked her out and tied her up, it would not be surprising if he was physically rough with Allie! The act of rape is traumatic enough and it has nothing to do with love – it doesn’t really have a lot to do with lust either, it is all power and control to the rapist.

Next Week Days Of Our Lives (DOOL) Spoilers: Sarah’s Surprise For Xander, ‘Xarah’ Having A Baby? https://t.co/BtbQc3CvZJ pic.twitter.com/uKkQyiEU6i

That is the reason many women are raped who wouldn’t even be considered attractive by many men. It’s all about the power over a victim who is unable to defend herself against usually a much larger and stronger man! Claire is alarmed and horrified when she listens to Allie’s emotional tale of what Charlie did and how he acted that night. She knows now that he is a real monster and there is no excuse! He has to be put away or stopped no matter how, before he hurts someone else!