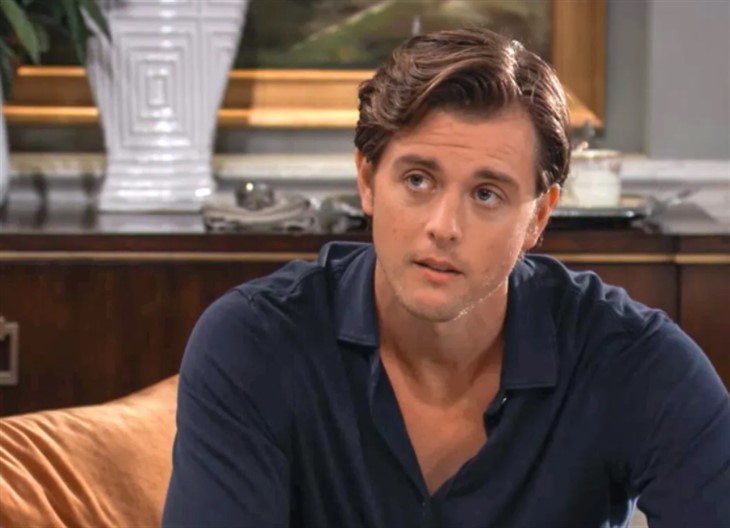 General Hospital (GH) spoilers tease that Michael Corinthos (Chad Duell) will offer an olive branch to Nina Reeves (Cynthia Watros) in an upcoming episode of General Hospital. Obviously, this will be concerning Nina’s attempts to be a part of her grandson Wiley Corinthos’ (Erik and Theodore Olson) life on GH.

General Hospital Spoilers – Michael Corinthos Is His Own Man

Longtime General Hospital viewers will remember that Michael is his own man, and he has acted against his mother Carly Corinthos’ (Laura Wright) wishes before. Carly would do anything, whether it was her right to do so or not to keep Nina away from Wiley. Carly now equates Nina with Nelle Benson (Chloe Lanier), citing Nina’s past bad behavior when Avery Corinthos-Jerome (Ava and Grace Scarola) was born.

As a matter of fact, there was a time that Michael, along with Kiki Jerome (Hayley Erin) took over care of Avery, not allowing either Carly or Sonny Corinthos (Maurice Benard) access to her – that was when he found out it was Sonny who had killed his birth father, AJ Quartermaine (Sean Kanan). At the end of the day, it is up to Michael and possibly Willow Tait (Katelyn MacMullen) who legally adopted Wiley whether to allow Nina visitation or even joint custody, although Nina would be up against a wall if she were to push for custody in a family court hearing.

For one, General Hospital spoilers show she would have to conclusively prove that she is his grandmother and that would require DNA testing. She would have to have Nelle’s body exhumed if she were not able to get a warrant for DNA testing comparing her DNA and Wiley’s. Plus, Wiley is old enough now that he could be affected by a lot of unnecessary drama centered around him!

Michael knows that even though Nina is capable of some pretty bizarre behavior, nothing has happened in over six years and she has made a success of herself in business and mostly in her life. She is guilty of a few bad relationships, but who isn’t? Michael would be the last one to judge Nina for her past because he believes in second chances, and even third and fourth if necessary. He has seen Nina around Charlotte Cassadine (Scarlett Fernandez) and knows what a good mother figure she has been to her, and he witnessed a good, if fake, mother and daughter relationship between Nina and Sasha Gilmore (Sofia Mattsson).

He is not pleased with Carly trying to override what should be his decision, and while he certainly understands her objections because of what Nelle did to her, it is not fair to take Nelle’s actions out on Nina! Michael is the Nelle expert – he knows what Nelle was and what she was capable of.

Nina, although she had some broken places in her own life and did not act rationally when she first came to town, has not tried to kidnap Wiley. She has tried to go about things right where Wiley is concerned. In spite of Nina’s trying to bring the law down on Carly for Nelle’s death, General Hospital rumors and spoilers hint he decides to give Nina an olive branch and will choose peace. He wants to make arrangements not through family court but will have a legal agreement drawn up and witnessed to allow Nina to be a part of her grandson’s life.