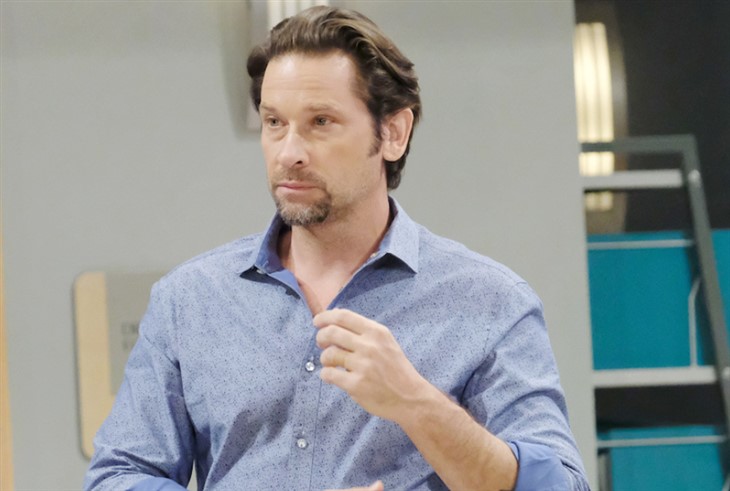 Franco finds he is having more and more of Drew’s memories as time goes on, and more than just of Peter August (Wes Ramsey) in Afghanistan and on Cassadine Island! It seems like the radiation treatments he is receiving are triggering more of Drew’s memories than they are helping his brain tumor, unfortunately. They are making him nauseous. They are making him lose his hair. But the imaging is showing anything but a decrease in his tumor, and what is really strange is now he is hearing other voices besides Peter’s – he is hearing a woman’s voice calling him her “toy soldier”!

Longtime General Hospital viewers will recall that is what Helena Cassadine (Constance Towers) called Drew after the brain chip was implanted that she controlled him with. Dr. Patrick Drake (Jason Thompson) had found it and removed it. This was long before Franco and Drew both found out that Drew was Franco’s foster brother Andy. This was when Drew first came to town and had no memory at all, and was known as Jake Doe.

Helena had wanted Jason Morgan’s (Steve Burton) skills as a hitman transferred to Drew’s brain through memory mapping and was trying to actually have two “toy soldiers” both having Drew’s Navy Seal skills and Jason’s hitman skills which would make them super soldiers. But Jason’s didn’t take, and Cesar Faison (Anders Hove) was going to kill him and that is when Peter “saved” Jason and put him in the Boronsky Clinic.

General Hospital viewers will recall that during the time that little Jake Spencer (Hudson West) was believed to be dead, he was on Cassadine Island! Franco himself found that out when he was giving little Jake art therapy when he and Elizabeth Baldwin (Rebecca Herbst) were first becoming close and starting to date. Little Jake was only four years old when he supposedly died in a drunken hit and run by Luke Spencer (Anthony Geary) and supposedly it had been his kidney that was donated to Josslyn Jacks (Eden McCoy).

Years later, it was revealed that Jake hadn’t died after all and Lucky Spencer (Jonathan Jackson) brought him home after Luke had discovered him on Cassadine Island. It turned out that much like Jason was rescued after being shot into the water off the Port Charles pier and taken to Cassadine Island, Helena had somehow rescued Jake for her own purposes which have never really been revealed. Franco has a Drew memory of seeing Jake on Cassadine Island… although Jason apparently never saw Jake.

Jason would have recognized him immediately. Evidently Drew was kidnapped before Jason was and brought to the island, and Franco has a clear memory of Drew trying to rescue Jake even though he had no clue Jake was his nephew. He only knew that the place he found himself in was no place for a small boy and tried to help, but Peter himself had witnessed it and prevented him from doing so.

Peter and a couple of other of Helena’s henchmen then punished Drew by hanging him on a pole and whipping him! This was the “scarecrow” that Jake saw and had drawn in the book that Helena left Elizabeth in her will! For Franco, it is a horrific memory that breaks his heart, but makes him so proud of the man “Andy” grew up to be! It also makes very clear to him how dangerous Peter really is!