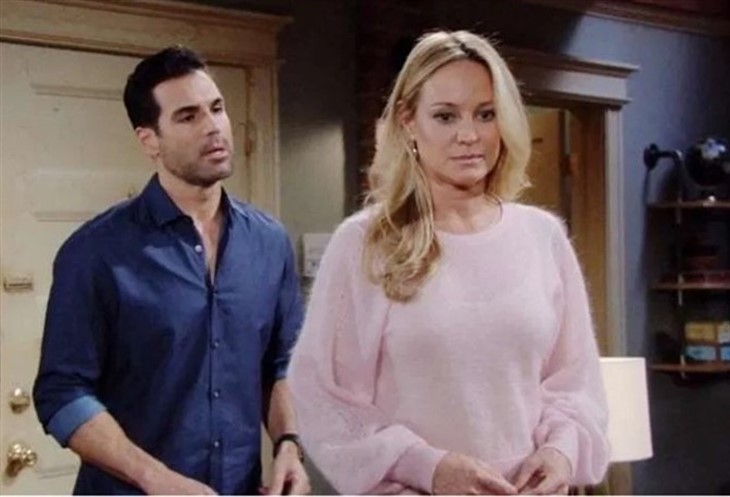 The Young and the Restless (Y&R) spoilers document that in Genoa City, Wisconsin Sharon Rosales (Sharon Case) loves Rey Rosales (Jordi Vilasuso). He loves her as well. That should be enough, during the very early stages of their marriage, to overcome any Adam Newman (Mark Grossman) issues.

Adam is a selfish, immature, destructive, goof. Other than those points, he’s a great guy.

Rey’s point is that Sharon needs to recognize that she’s moved on from Adam in her mind. Her heart hasn’t followed yet, which is why Shey’s existence is important.

Consider the contrast between Adam and Rey when it comes to Faith Newman (Alyvia Alyn Lind). Adam stole her at birth and recently kissed her married mother. Rey raised his younger siblings when his father abandoned his family years ago. Now, he put his feelings about Adam aside to help Sharon deal with Faith’s problems.

Details in the last paragraph represent some of the reasons why Sharon fell in love with Rey and married him. Adam represented an age-old crush in the post-Nick Newman (Joshua Morrow) era.

Besides Adam’s modern difference in appearance (devoted Y&R fans get the recast reference), he’s still the same cad he’s long been. Rey helped Sharon get through her cancer battle. Adam had the other woman he claims to love, Chelsea Lawson (Melissa Claire Egan) abducted, which led to her stroke.

Rey was principled. He tried as hard as he could to make his marriage to Mia Rosales (Noemi Gonzalez) work. Everyone who is familiar with that character knows that Rey had the patience of Job when doing so.

Rey has been there for Sharon when she’s needed him. Now, what Rey is demanding is respect. He shouldn’t have had to make that strong statement, but he did and if Sharon is smart she’ll heed his call.

Adam has been baiting his brother, Nick, for years. Grossman’s character tried doing that to Rey last year, specifically at Crimson Lights, when talking about how Sharon would eventually choose a Shadam reunion. But Adam’s ploy didn’t provoke Rey as he hoped.

Rey and Nick are in sync when it comes to Adam. They know who and what he is. It’s possible that Adam can be defeated if they continue working together against their common enemy.

Sharon may not want Rey and Nick to be her defenders. But the Adam threat can be neutralized, or possibly defeated as long as Sharon maintains control.