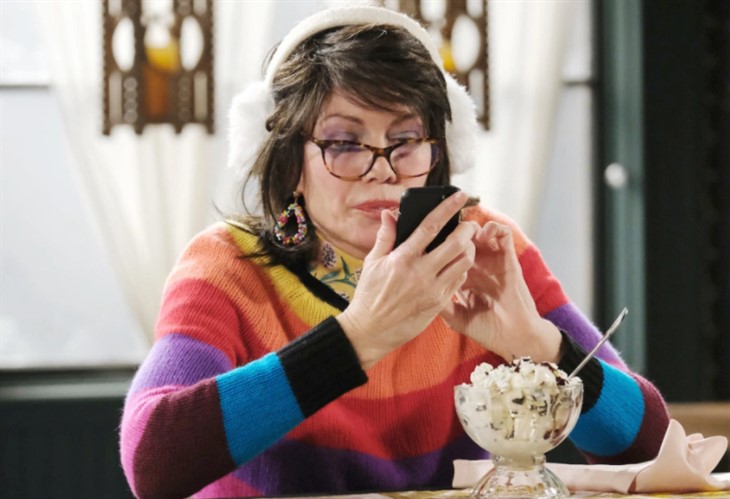 Days of Our Lives (DOOL) spoilers for next week of March 1 reveal that Lani Price Grant (Sal Stowers) visits Kristen DiMera (Stacy Haiduk) at the prison. As fans know, it won’t be Kristen she sees. The detective knows her best friend but probably won’t realize she’s talking to Susan Banks (also played by Haiduk). When she finally connects the dots, Lani will have to make a tough call.

DOOL spoilers for next week reveal that Kristen actually gets Susan to agree to trade places. Kristen instructs her lookalike on what she needs to do so the switch is believable, which includes Susan getting her teeth worked on. Once that is done and Susan can pass for Kristen, the body swap will take place. After the inmate walks out of the prison, Vivian Alamain (Linda Dano) will be keeping an eye on Susan.

Kristen has plenty of experience pretending to be other people. Not only does she have Susan act down, but she used a mask to trick Brady Black (Eric Martsolf) into sleeping with her. However, the same cannot be said for Susan. She can look exactly like the villain, but she will never be able to pull off the switch. The minute she opens her mouth, people will know it’s not the real Kristen.

Days of Our Lives spoilers from the new issue of Soap Opera Digest reveal that Lani goes to prison to see her best friend. However, she instantly notices that Kristen isn’t acting like herself. They have been best friends since they nearly became Italian nuns. They have been through a lot together and are very close. So, Lani will know that something isn’t quite right. But she probably won’t realize it’s because Kristen is literally not herself. At least not right away.

Ever since the BFFs left the convent and returned to Salem, Lani has put everything at risk. She helped Kristen escape police custody and kept her whereabouts a secret when she was a fugitive. She put her career, marriage, and freedom on the line. However, it doesn’t seem that Kristen has done the same for the detective.

Days Of Our Lives (DOOL) Spoilers: Tripp Has Fallen In Love With His Nephew, Tells Steve He Wants To Be Henry’s Father Figure @soapoperaspy https://t.co/h4841crjJd #Days #DOOL #DaysOfOurLives

Now, when Lani realizes that the doppelgangers have switched places, she might try to reason with Kristen. Tell her to sneak back into the prison and let Susan go back to her regular life. That her plan to keep Brady and Chloe Lane (Nadia Bjorlin) apart is going to blow up in her face.

However, the felon isn’t mentally stable and will continue to spiral. So, she isn’t going to listen to Lani. This might put the detective in a tough spot. She could be forced to expose and arrest Kristen. Considering it the ultimate betrayal, could Lani end up becoming Kristen’s next target?

Be sure to catch up on everything happening with DOOL right now. Come back here often for Days of Our Lives spoilers two weeks ahead, plus soap opera news, and cast updates.