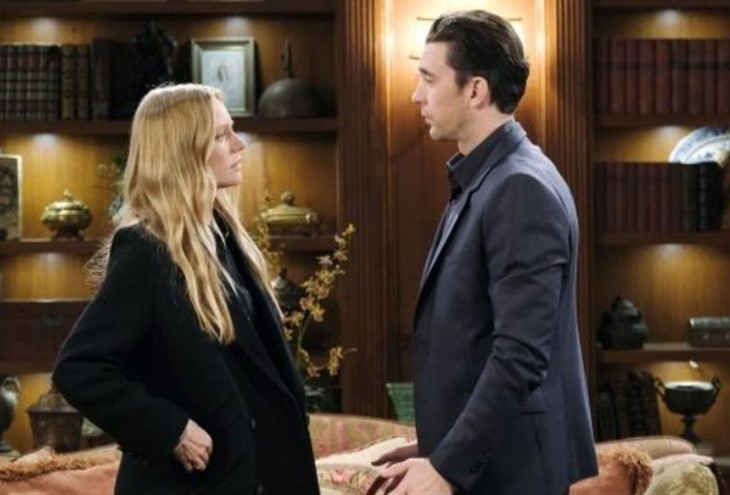 Days of Our Lives (DOOL) spoilers reveal that in Salem Jack Deveraux (Matthew Ashford) has a warning for Chad DiMera (Billy Flynn). After kidnapping Gwen Rizczech (Emily O’Brien), Abigail begins to dangerously spiral out of control. Jack and Chad team up to try and save both women from a devastating fate. Can Abigail be reeled in before she gives Gwen the death penalty?

DOOL spoilers reveal that Jack learns that Abigail and Gabi Hernandez (Camila Banus) kidnapped Gwen. He tries to talk to Abigail and explains that Gwen did terrible things, but it was a reaction to the years of pain, rejection, and abandonment. However, she is furious that her father seems to be defending the woman that destroyed their lives. Soon, Jack will realize that Abigail is spiraling out of control. With Gwen being held hostage, this situation could end tragically for both of his daughters.

Jack goes to Chad to warn him about Abigail. He relays exactly what happened and how they ended up getting into a terrible fight. Then he gives Chad a warning that Abigail might be becoming unglued. Instability along with fury is a dangerous mix, but Jack isn’t just worried about Gwen. He is also concerned about Abigail, which is why he needs Chad’s help. If anyone can get through to her, it’s the man she loves. When Chad thinks back at the times Abigail’s mental illness took over, he knows this is a life or death situation. Jack and Chad could team up to save both Gwen and Abigail.

Days of Our Lives spoilers reveal that kidnapping Gwen was for the purpose of getting her to confess. Abigail demands that her half-sister admits to murdering Laura Horton (Jaime Lyn Bauer). Now, Gwen is used to having the upper hand. But now she will find herself a hostage with an unstable woman calling the shots. Gwen knows that she has to play this carefully.

Even though she hates Abigail for having the “better” life, there might be a part of Gwen that empathizes with her. For the first time, we might see Gwen think about someone besides herself. Could she actually try to talk to Abigail as she realizes the damage she’s caused? Gwen will try to neutralize the threat, as well as stabilize a madwoman. If Abigail continues to spiral out of control, she could end up “sentencing” Gwen to the death penalty.

While being held hostage, Gwen might learn some things. For example, she has this delusion that Abigail had a perfect life. However, it wasn’t like that. For a lot of years, Jack was MIA or presumed dead. So, Gwen isn’t the only one that grew up without a father. For part of Abigail’s life, she was without one too. As Gwen learns more about Abigail’s childhood, she might realize they really aren’t that different. But the revelation could come too late. Will Abigail murder her own flesh and blood? Or will Jack and Chad be able to get there in time?