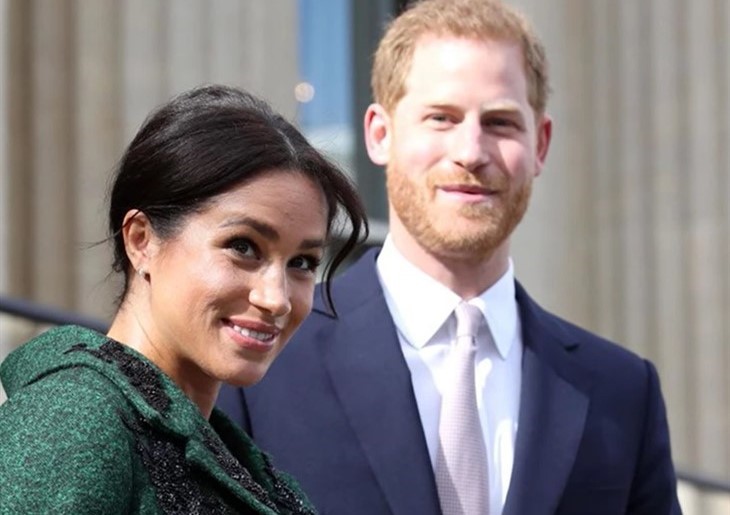 British royal family news reveals that Prince Harry, Duke Of Sussex and Meghan Markle have made their first joint appearance since Queen Elizabeth declared they were no longer working royals. Prior to that, they announced they are expecting a second child, and then dropped the bombshell they are giving Oprah Winfrey a tell-all interview.

Last Friday the couple were stripped of their remaining royal titles and patronages after one year ago declaring their independence from the monarchy. Today they recorded a 20-second video to sell their Archewell Audio podcast at a Spotify live stream event broadcast.

Despite the Queen’s statement, they still insist on being called the Duke and Duchess of Sussex! In 2020 they announced a deal with the music streaming giant, thought to be worth up to £30million; they have yet to produce a regular podcast for their employer.

That year they also partnered with Netflix and again have yet to produce anything tangible. Commercial deals such as these, plus their vocal political preaching put the couple at odds with the impartiality required of those in public service to the UK and monarchy.

Royal Family News – What Have the Markle’s Done for Spotify?

In the very brief appearance, Meghan insists that they are, ‘using podcasting to drive powerful conversations’, and Harry is allowed to finish her sentence, ‘that inspire, challenge and educate’.

Dressed in a£2,645 Oscar de la Renta dress Meghan then says, ‘We created Archwell audio to make sure we can elevate voices that maybe aren’t being heard and hear people’s stories.’

Harry chimes in, ‘And the biggest part of this is trying to create this community of where you can share, that will encourage everybody else to then share their own vulnerabilities in that safe space.’

Harry and Meghan caused a ruckus when they dropped the bomb that they are next to sit on Oprah’s confessional couch. They are said to be in shock because the Queen stripped them of their royal and sporting patronages and ‘poured their hearts out’ to Winfrey. Get the tissues ready folks.

The tell-all interview airs on Sunday, March 7 with no topics off-limits. Today the Queen got in the last word, however, announcing that she will beat them to the airwaves by addressing the nation on TV just hours before the Sussexes’ interview.

Her Majesty was due to attend the annual Commonwealth Service on March 8 but it has been canceled due to Covid-19. Instead, she will present her annual message 24 hours earlier for A Celebration For Commonwealth Day, in a speech pre-recorded at Windsor Castle and broadcast on BBC One on Sunday, March 7.