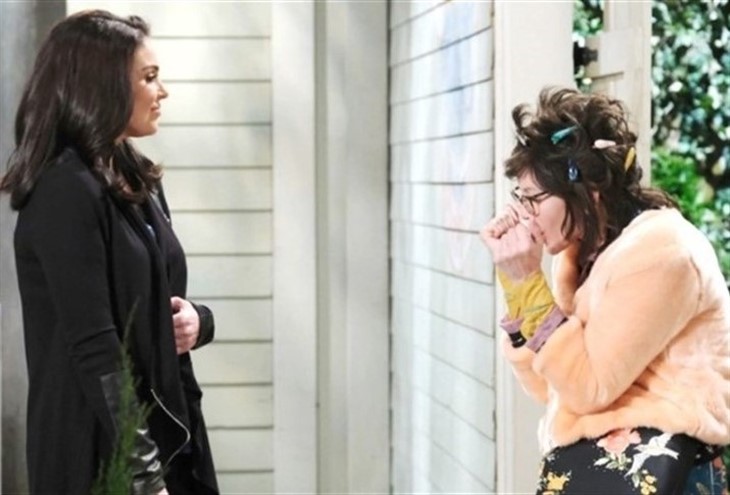 Days of Our Lives (DOOL) spoilers reveal that in Salem Chloe Lane (Nadia Bjorlin) questions Susan Banks (Stacy Haiduk). The inmate thinks she is fooling everyone, but Chloe likely figures out the truth. She will want Kristen DiMera (also played by Haiduk) to expose herself. But antagonizing the villain intentionally could have dangerous consequences.

DOOL spoilers reveal that Chloe is already questioning why Susan is always hovering. She can sense that something isn’t quite right. It was only last week that Chloe and Susan talked outside of Brady’s Pub. The person that Chloe sees now isn’t that same woman. She ends up firing off some questions. While Kristen thinks she has prevented her scheme from being exposed, she might be wrong about that.

Since Kristen is playing games with everyone, including Brady Black (Eric Martsolf), Chloe might decide to play a game too. She most likely hides the fact that she knows Susan is really Kristen in disguise. She wants Brady to know the truth but also needs him to see Kristen as a crazed madwoman. She knows exactly how to do that.

Days of Our Lives spoilers reveal that Chloe could intentionally antagonize Kristen. When the villain pampers Brady, Chloe interrupts and insists on taking over. Anytime Kristen gets close, Chloe makes sure to physically come between them. The closer that Chloe gets to Brady, the more agitated Kristen will become. This is exactly what Chloe wants and there is a reason why she might be using this particular angle.

If Chloe simply tells Brady that Susan is really Kristen, he will be upset with her, but won’t necessarily dump her. He wants to see the best in Kristen and is intentionally ignoring all the red flags. To protect Brady and his young daughter, Chloe needs him to see Kristen in all her outrageous, crazed glory. Chloe might figure that the best way for Brady to see Kristen’s dangerous insanity is for her to explode.

While that is going to happen if Chloe keeps pushing her buttons, exposing the inmate might not be all that viewers will see. The opera singer is playing a very dangerous game. Kristen could completely go off the rails and attack Chloe. If she loses Brady, she could turn on him to make sure that nobody else can have him either. Or John Black (Drake Hogestyn) or Marlena Evans (Deidre Hall) could walk in and get caught in the crossfire. There are so many things that can go wrong. Someone could end up getting hurt or even die. What do you think will happen when Brady finally learns the truth? We will have to keep watching the NBC soap opera to find out.