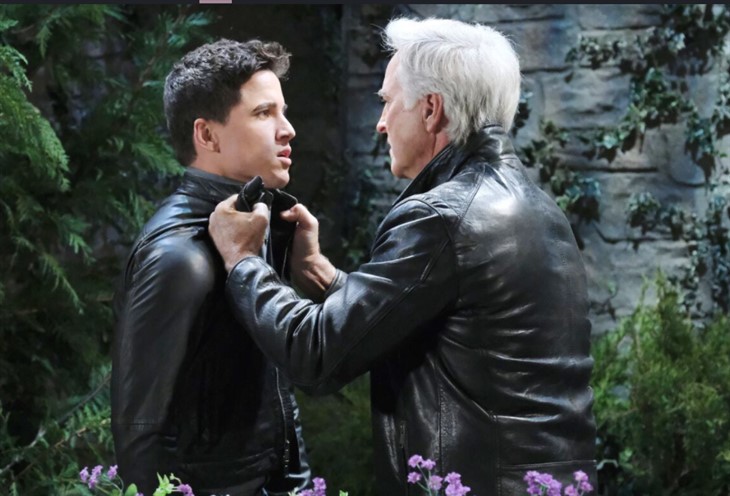 Days of Our Lives spoilers tease that John Black (Drake Hogestyn) will threaten Charlie Dale (Mike C. Manning) as Charlie tries to play the tough guy in an upcoming episode of Days of Our Lives!

Days of Our Lives viewers will recall that earlier, Claire Brady (Isabel Durant) tried to lure Charlie into a trap when she found out he may not pay for his crimes. She hoped to get him to confess to raping her young cousin Allie Horton, (Lindsay Arnold) because all the paternity test proved is that they slept together, not that he raped her! That is exactly what Charlie told Claire, but she kept digging in and telling him she didn’t believe a word he was telling her.

Days Of Our Lives Spoilers: Kristen DiMera Struggles To Keep Chloe Lane Away From Her Man!

Charlie had hoped to convince Claire of his innocence, but when her rejection sunk in, he turned on her and flipped out! He had started to become violent with her before but Ben Weston (Robert Scott Wilson) got him away from Claire before he could do anything to her. This time it sounds like Claire’s grandpa John may happen by while Charlie is flipping out on Claire and Charlie should remember that old song “Don’t be messin’ with big John Law, or he’ll be messin’ with you” and right now big John is laying down the law to Charlie for messing with both his granddaughter Claire and his step-granddaughter Allie! John is as angry as anyone has ever seen him as he prepares to throttle him – he grabs him by the coat jacket and tells him he’s a dead man!

Prior to John grabbing him, NBC Days spoilers hint Charlie probably dials up the fake bravado he’s learned from being part of the Vitali crime family, what time he has actually been with them! Days of Our Lives viewers will remember that Charlie grew up with his birth father, but still that was in Philadelphia, where his uncle Angelo Vitali (Angelo Tiffe) lives – when he’s not in prison, that is!

Even if his mother, Ava Vitali (Tamara Braun) didn’t have a lot to do with him, he still may have gotten to know his uncle Angelo and maybe some cousins if Angelo has any kids! Everyone knows that Charlie’s shy and bumbling side is a front on Days of Our Lives – and he is capable of deadly rage and anger! He tied up his own mother in his apartment and drugged her after knocking her out!

According to DOOL spoilers,  Ava was lucky that Rafe Hernandez (Galen Gering) discovered her! But now he’s got John Black to deal with and that brain aneurysm he dealt with a few months back that changed his impulse control over his emotions may just be coming into play here – no one has ever seen John in that kind of a state even when dealing with Stefano DiMera (Joseph Mascolo)!

Days of Our Lives spoilers show Charlie doesn’t expect that kind of anger from an old white-haired grandpa, and in spite of his tough-guy bravado he has a good bit of fear in his eyes when John grabs him and confronts him! They are in front of a stone wall, for all Charlie knows he’s looking forward to getting his head bashed in on it! Everybody in town plus someone that hasn’t gotten there all have targeted on his back, and John is driving that truth home to Charlie!