The Bold And The Beautiful (B&B) Spoilers: Steffy Makes Things Clear To Hope She Wants To Be With Finn 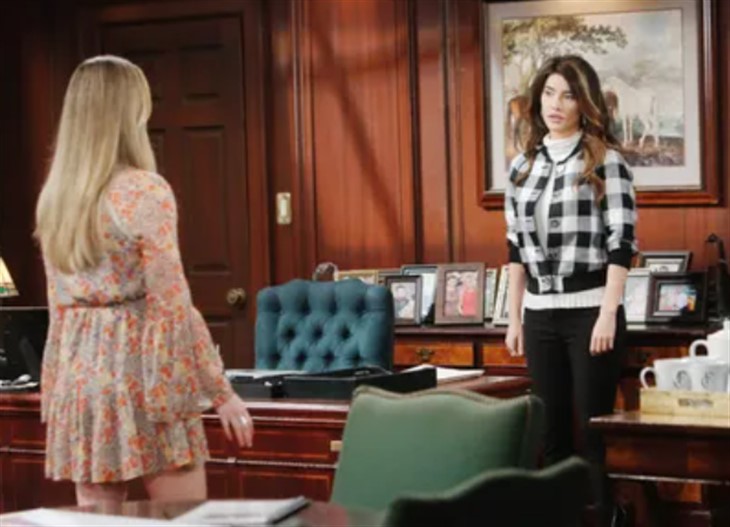 Viewers of The Bold and The Beautiful will recall from recent episodes that Steffy and Finn talked things out after the shocking result of the paternity test that showed Liam, not Finn, was the father of Steffy’s baby! It was rough, but they committed to each other even though Finn was very disappointed that the baby wasn’t his and that their life would be more complicated with Steffy having a second child with her ex.

Hope was even more upset, and cried her eyes out, knowing that Liam would want to be with Steffy because he would have two children with her now and didn’t believe him when he said he didn’t love Steffy, and he wanted to make things work with her. The worst for Hope is that he didn’t even question what he thought he saw the night that he barged in on a shirtless Thomas Forrester (Matthew Atkinson) hallucinating and kissing a mannequin made to look like Hope for a “Hope For The Future” campaign. He automatically assumed his wife was cheating on him with Thomas and went straight to Steffy – the two got drunk and spent the night together and had sex. This is when Steffy’s baby was conceived. Steffy doesn’t love Liam, she loves Finn, and she will make it very clear to both him and Hope just in case they have any doubts!

Steffy will tell Finn and Hope together that she loves Finn, and not Liam and will make sure neither of them has any doubt about how she feels! This may take place in the Forrester Creations office or possibly elsewhere, such as one of their homes. The whole fiasco has been unbelievably destructive and devastating to all parties, and Steffy blames herself for her indiscretion – she should have known better. Drinking till they were drunk was really no excuse – alcohol removes inhibitions, but it certainly doesn’t create anything that wasn’t already there, and that is what makes it so hard. If Steffy and Finn had broken up or had a fight or whatever, at least they could have called it grief sex – but she doesn’t even have that excuse. It was just stupid – and she’s admitted it over and over.

The Bold And The Beautiful Spoilers: What Does The Future Hold For Steffy, Liam, Wyatt, And Flo On B&Bhttps://t.co/5fD7wtx7Kp

Still, it will be a struggle that could have been avoided and Steffy feels the guilt of it all. Steffy is likely to become very emotional as she again tells Finn and tells Hope that she really has no excuse for her bad behavior with Liam. She continues to beat herself up, especially considering that it’s Liam’s baby she is carrying, although Finn cautions her not to get overwrought. It’s not good for her or the baby, and she is supposed to avoid stress! Still, she reiterates how much she loves Finn and doesn’t love Liam anymore and hasn’t for a long time!