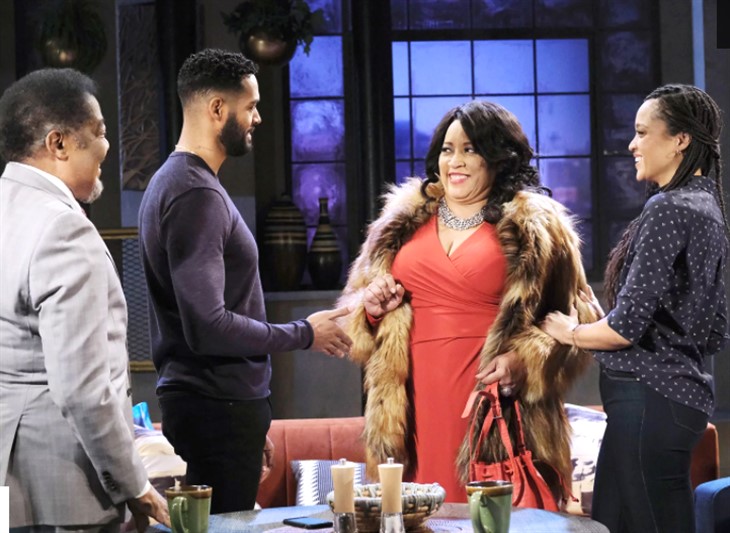 Days of Our Lives (DOOL) spoilers reveal that Paulina Price makes her debut on March 1. Actress Jackée Harry teased what fans can expect in her first scene. The scene mirrors when the actress was introduced in 227. Putting the two screenshots side by side, they look identical, right down to the red dress. Keep reading to find out more about what to expect.

DOOL spoilers reveal that Paulina will appear on our television screens beginning March 1. In a promo clip, the actress teases that her character is bold, fabulous, and gets into a bit of trouble. As for her first scene in the NBC soap opera, Jackée posted two screenshots on Twitter. One is of her Salem debut. The second image is her introduction in 227. The two photos look identical. The actress has the same big smile, was wearing a solid red dress in both pictures, and it almost looks like she has on similar necklaces and fur coats!

It appears that the soap took the time to mirror Jackée’s character in 227. Fans are really excited about Jackee coming on board. Of course, everyone knows her name and face. Even though she’s done a lot over the years, she is mostly remembered for being in 227.

“If my #DAYS entrance look seems familiar… rewatch the 227 pilot. See you March 1 on @NBC!”

Days of Our Lives spoilers from the latest issue of Soap Opera Digest confirms that Paulina arrives in Salem and checks in with Lani. Then, she meets Eli Grant (Lamon Archey). Paulina will also be introduced to Abe Carver (James Reynolds), but Paulina doesn’t like him very much. We have to assume it has to do with Abe’s history with Tamara Price (Marilyn McCoo). We can’t think of any other reason why Paulina would instantly dislike Abe. But we do know that Abe wasn’t aware that he had a daughter until Lani came to Salem. Even though Tamara and Abe seem to get along fine these days, some family members might not be as forgiving.

DOOL Spoilers – Everything We Know

Paulina won’t be the only newcomer to Salem. We will soon meet her daughter, Chanel (Precious Way). Paulina is a very successful businesswoman who is outspoken and extremely independent. She believes Salem would be a good place to open up a new business. However, the main reason she comes to town is to reconnect with her family. We will keep you posted with new developments and updated information as it becomes available.