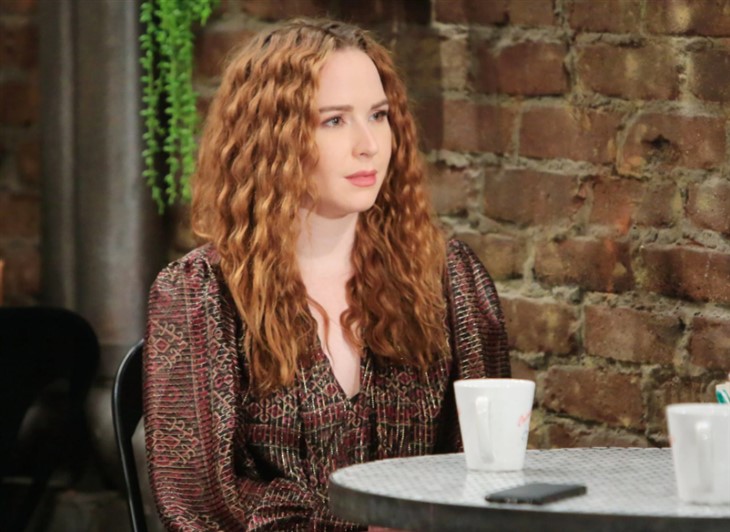 The Young and the Restless (Y&R) spoilers document that in Genoa City, Wisconsin Kyle Abbott (Michael Mealor) is gambling that he’s not the father of Tara Locke’s (Elizabeth Leiner) three-year-old son. But if he is, then Mariah Copeland (Camryn Grimes), who is his friend, was just compromised.

Taking Grimes’ character into his confidence is a start. So, maybe her knowledge of Kyle’s predicament will soon allow him to realize that he should tell his father and fiance the truth right now. Mariah is level-headed and wants the best for those she cares about.

An untenable, blind promise was part of Kyle’s choice to unburden himself. But that does not represent an honest way to take someone into confidence.

Mariah must now abide by her promise or risk Kyle’s wrath. The potential fracturing or breaking of their friendship would be her assumed consequence.

Kyle fears Ashland Locke’s (no actor is known to be cast for this role) reaction if the New York mogul becomes aware that Tara was involved with him approximately four years ago. However, if Kyle proves to be the father of Tara’s child, then an entirely different threat exists.

Mariah saw the look of panic on Kyle’s face as he described the ferocity of Ashland’s response to a business rival in the past. Imagine if this to-be-introduced character confirms that Kyle is the biological father of a child Ashland believes is his own.

Mealor’s character believes that he’s protecting Summer, Jack Abbott (Peter Bergman), and other loved ones from needless worry. But surely Kyle is also protecting himself from scrutiny.

The Young And The Restless (Y&R) Spoilers: Rey’s Threat To Adam Real – Sharon Must Convince Him Of Her Love #YR #YoungandRestlesshttps://t.co/9M4s1wyq7Q

The Young And The Restless Spoilers – The Truth Comes Out Shortly

The amount of dialogue that’s been presented in recent weeks and buzz that Leiner will be seen on-screen in early March means that the truth will come out. When it does and with whatever the detailed result, Summer, and Jack will be disappointed.

Kyle owes it to the woman he loves and his father to not only tell them about the crisis he’s facing but also to help prepare them for what may becoming. The hole he’s digging is unnecessary and will look like what it is, an attempt to bury the past.