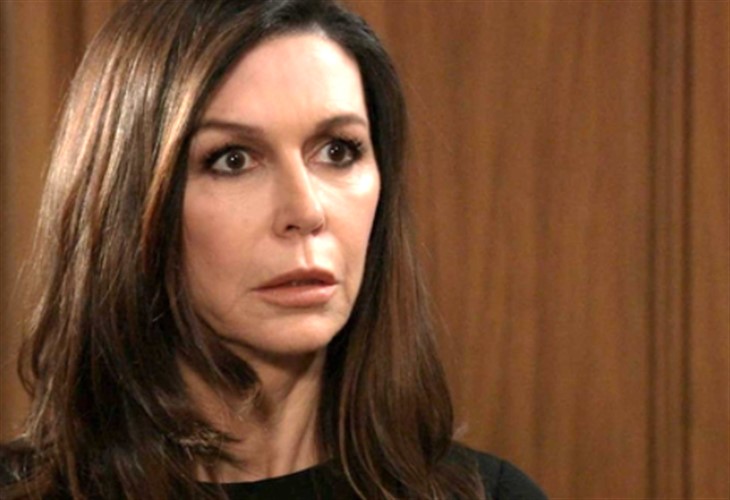 General Hospital viewers will remember that when Valentin Cassadine (James Patrick Stuart) and Anna talked about Peter the day her wedding was to take place, that they discussed Peter. Anna was worried that now they would have no evidence against Peter since he threw the file in the fireplace. Valentin said let the WSB find their own evidence – if it was known that Anna had created a dossier and kept it secret for so long then she could be considered as aiding and abetting Peter.

Dr. Hamilton Finn (Michael Easton) also knew about that file – although he wouldn’t have handed it in to the police, he was not happy about Anna deluding herself about what the file clearly showed! Valentin and Anna both were deceived by Peter and both were hurt, Valentin in particular. Valentin had taken him from a good adoptive home and handed him back to Cesar Faison, (Anders Hove). As a result of realizing his error, Valentin had attempted to mentor as well as to protect Heinrik aka Peter all his life from when he was a child.

But there is always that question of nature versus nurture, and whether it would have made any difference in Peter at all had he been raised in a good home. The WSB probably would not have been able to determine that Anna had gotten what was in the file, however, there was someone else that Anna talked to about Peter – and all her mistakes. She confided in her ex-husband, District Attorney Robert Scorpio (Tristan Rogers)!

Unfortunately, as the District Attorney, Robert would be constrained to turn over Anna and her confessions to the PCPD, although he would have her talk to Mac Scorpio (John J. York) first, keeping it in the family if not able to keep the secret. Anna likely has apologized to Finn and told him what happened about Peter burning the file in the fire as well, and he may have made a copy and kept it or scanned it into a computer file. Anna may have tried to get Robert to start a case with the WSB as well but he has no more clearance than she does and maybe even less since they forced him to retire! This will now be new evidence in the murder of David Black (Lon Gowan), the hit man that Peter sent to kill Dr. Andre Maddox (Anthony Montgomery) but then Peter killed Black instead, in the operating room where Andre was trying to remove Drew Cain’s memories from Franco Baldwin’s (Roger Howarth) brain.

There will also be charges in the disappearance and presumed death of Drew, although the attacks on Andre that happened before would be out of the PCPD’s jurisdiction. The WSB may have to be brought in on Drew’s disappearance since it happened overseas. Likely with Robert by her side, Anna will face Mac and tell him about the intel she found out about Peter, and also she will likely have to tell that she found out Liesl Obrecht (Kathleen Gati) had been exonerated of her charges. If they can get the WSB to verify that Liesl was cleared, that will be a big part of the evidence that Peter framed her!